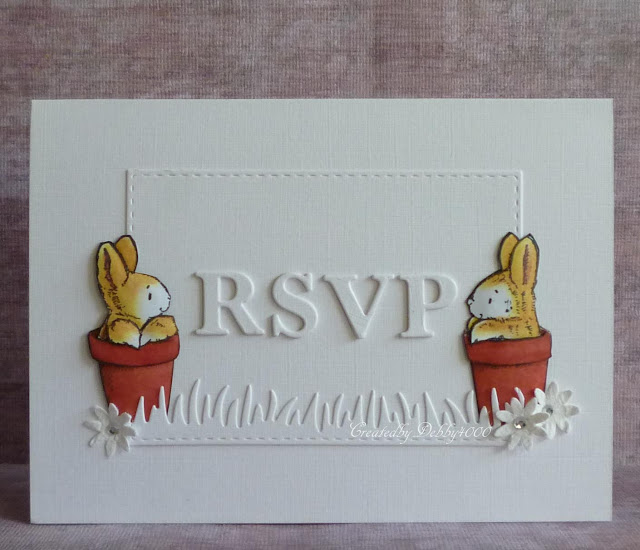 My daughter wanted to send her friend an RSVP for her wedding even though the bride already had a yes on her answer list. DD wanted bunnies on the card they were even on the wedding invitation.

To start with I tried to think of a rabbit stamp without Easter eggs, when I realised I had the long stamp with five bunnies in flower pot and two of the bunnies were looking at each other and the idea for my card came to me.

Yes that is a Simon Says Stamp Stitched Rectangle and the grass is MFT with some brought flowers from Hobbycraft but did speed things up a bit. I cut the bunnies and once I had cut the letters from a Memory Box Alphabet die I worked out where they would be placed. Really pleased how it turned out.

So cute And fresh! Love this 😀

Hi Debby this is a stunning card I love the bunnies. I do have the same stamp so you have given me another way to use it. Thank you. Hugs Jackie

You should be VERY pleased, it's gorgeous.
Faith
x

I would be pleased too Debby..fabulous card and design..

This is really lovely Debby, how I wish I had such fantastic ideas!! xx

Wow, great job with that special request, bet they loved it!

Oooo what a sweetie and such a lovely RSVP card too, luv Sam x