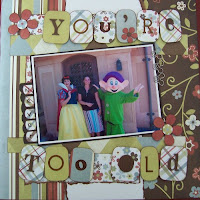 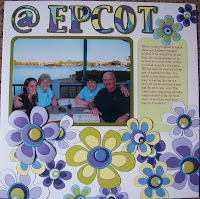 I have a cold, not even an impressive flu just a cold, but somehow its affected my right ear noises are disturted so like the loo flushing sounds like an explosion going off in my head. DS made us to go to Currys so he could buy us a telly (lovely 32inch HD ready telly) but all the noise in the showroom was bombarding my ear that it was a case of either fainting or be sick. So I hide in the car with all the windows up with the bright sun light streaming into the car it must have been 30degrees in there.

Didn't make it to the crop which itself was cancelled, joined in some of the classes on the Cyber crop at UKS, I did really well considering. I managed half the classes but didn't do any of the challenges. Added two of my favourites.
Posted by debby4000 at 10:12 PM 1 comment:

Look what I made 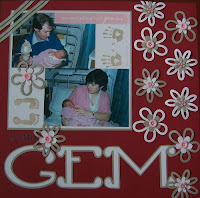 First LO using my Cricut. It cut out the title and flowers and it was really easy, once you work out the settings to cut Bazzill it was a piece of cake. This LO was for the weekly challenge on UKS could only use Bazzill, something brown, buttons, border and a big title. Its the cyber crop this weekend but I don't think I will get much done cos off to Modscraps crop on Saturday and OH is working Sat night with BIL and there is deadline for uploading classes (it always crashes at about 4pm on Sunday so this is a way to avoid the meltdown).

I have a cricut, oh yes I have a cricut, but it stuck in its box and it won't come out.
And I've struggled to set up the Epson scanner to scan and stitch a DBL LO to post to Scrapbunny at UKS for my pre crop challenge to find out my ntl e-mail only works when I signed in as DS also it can only 500 pixels and it looks pants but at least I get points for my teams.
Got woken up by the Postie with two pizza boxes, Pattern Paper which I didn't buy in the US and Banana Frog stamps that can only be brought at Banana Frog so there Sis. ( she wouldn't let me look around the shop where we got the Cricut she said I brought enough BAD SISTER)
Posted by debby4000 at 3:29 PM 1 comment: 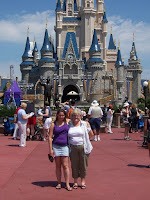 Hit me yesterday, woke up at 4am couldn't get back to sleep, suffered badly with my joints possible cos I overdid it with the washing as well.
Managed to watch New Tricks just then collasped into bed, woke up a couple times but went straight back to sleep.
Trying to sort out what I can or can't do at the Cyber Crop on UKS found out there is upload deadlines for the classes means I can't do the Saturday classes cos I have to upload them by 10am on Sunday.
Haven't receive any parcels yet either hope they come before the weekend.
Haven't been able to get a cricut yet but there's a chance a LSS near me will be getting a delivery this week so fingers cross.
Posted by debby4000 at 11:57 AM No comments: 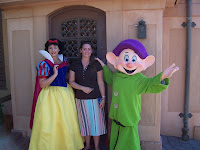 Suffering from a bit of jag lag but here I am. Here's my DD with her favourite character and no it's not snow white. We had a great time and even now I miss my little girl. It was really hard leaving her behind more so than at the airport last October when she left for her adventure, but she's following her dream for that I admire her greatly.
I brought load of stash but no cricut there isn't one anywhere near Orlando so tomorrow I'm on the hunt for one cos I managed to buy the cartridges for about £25 each. Asking for special assistance wasn't so bad or at least my Sis didn't think so we managed to jump the queues at both Gatwick and at Orlando. Disney was very good for making sure wheelchair users didn't miss a thing but Seaworld and Cypress Garden was a bit hit and miss, not so much for wheelchair users but didn't care that the family occupy had to struggle to find seats. Shopping was great managed to buy loads of stuff it was really great not worry about money so much (my lump sum).
DS managed to corrupt the Hard drive while I was away so have come back to find I can only get my e-mails if I log on as DS and not sure if I can remedy this. But have sorted out a virus thingy from Virgin which seems to be better than the one I had and its free. The printer is back on, so is Kodak which is what I use for my camera. Adobe has been updated so I can still read my DC e-mails providing I log on as DS. All my blog lists are gone and I've lost some photos but most are backed up on an external hard drive (thank God).
The cyber crop on UKS is well ahead I've missed out on the mystery kit and all the class kits but have sorted out which classes I should be able to do but its going to late nights on Friday and Saturday. Ok thats it for now but I'm not going to admit after spending a heck of a lot of stash money that I've been Atml and brought the crate paper kits or than I've been on Banana Frog and brought the new stamps I was admiring before I left for the States or that I've popped onto Pricestorm and made sure I've plenty of coloured ink for the printer to print loads of photos. No way I'm gonna admit it.
Posted by debby4000 at 10:56 PM No comments:

this time tomorrow I will be up in the air. At this moment we won't have any luggage cos I'm not packed and the most important thing to pack is my craft money.
Posted by debby4000 at 1:18 PM No comments: 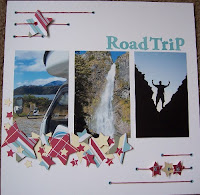 This is my take on Kirsty class on DC had to alter it to fit the pics in. The DC are having a bad effect on me, all my scraps are now colour coded!!!!! Have tidied my craft room too but I need to find a secret space for all my craft mags cos they're taking over my little room and I will need room for my Cricut and all my new stash that I'm getting. Just found out Banana Frog has got new stamps and I need them but with going to the USA can't justified buying them.
Posted by debby4000 at 3:02 PM No comments: 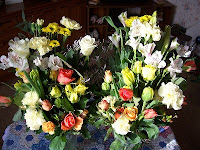 Here are the lovely flowers I got from work aren't they gorgeous, unfortnately on Tuesday before we leave we're gonna have to bin them. DS will not appreciate their beauty nor will he chuck out when they've gone off so two weeks later their be smelly. So I photo them and some of the individual flowers, I am not a photographer but they will do.

A very generous pension, so much so I must not say anything bad about them ever again. Even so having a mild meltdown. Deciding work was too much was the right decision the fact that everything has fallen into place means it was the right time. This means people agree with the fact it is unlikely I will be 100% fit again.
Posted by debby4000 at 1:52 PM 1 comment: 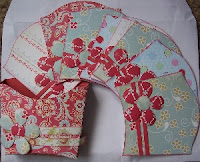 Here's the chip box I've done for the team I'm on at UKS each insert has my details on the back. I so love doing things all the same (not). Received my DC have to say I was a bit disappointed, not their fault, the mini book is that concertina thing that we did for Mark's wedding invites, my finger has a permanent scar for all the folding I did, so while very nice I won't be doing that one. Probably will do something similar for Kirsty's class but I did like the tips on mixing patterned paper, from now on no picking patterns I love randomly ,keep within the same range. Looking forward to when I come back from the US will have two weeks worth in my inbox I'm sure the first week is just not my taste.

Need to finish my two pages of my circle journal, the book is completed just need to do my pages, I squirted them with inks last night so hopefully will be dry to play with.

This afternoon is my meeting with my HR manager, so I will sort out my locker key etc since I no longer work for them, hope the news is good. Oh and by the way six days to go. 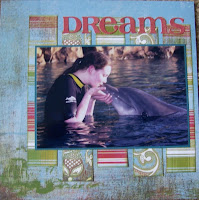 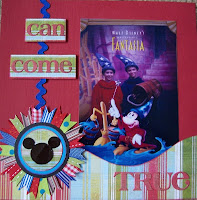 Seven days to go can't wait although not sure about having assistance at the airport. It will be the first time we've done this usually manage at Bournemouth Flying club where everything is a hop skip and jump away from each other. Not that I can hop skip or jump.
I don't have anything recent to post but these are two pages out of Andrea home from home book I made her before she left and seeing they're Disney I thought they were appropriate.
Posted by debby4000 at 12:53 PM No comments:

Yesterday was my last official day of working and after 18 years I no longer work for M&S. There was no band playing or fireworks not even so much as a goodbye. I still haven't had my meeting with the HR manager that won't be till Wednesday hope that will be good news, they owe me some holiday money and I'm hoping to use that to buy a cricut.
No crafty pic struggling to make my CJ, I have almost finished the book, so I will have my two pages to do but it will be worth 50pts for my team on UKS when done.
10 days to go before we off to US and the list is getting bigger and Andrea if you reading this we have a suitcase full of crisps and sweets.
Posted by debby4000 at 11:36 AM No comments: