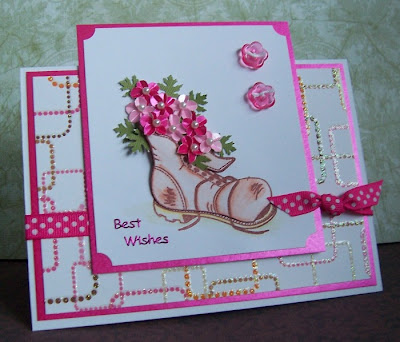 Two buttons, one ribbon and a 'spoonful' of flowers.....! Put all the ingredients together and bake in a craft room until complete ! Now the boot was brought from the make it show and was a acylic stamp I think from the fourth dimension she was showing how th make a collage of flowers onto the boot, I tried but it really did look awful so I settled into making the dinky flowers that I learned at a quilling class. 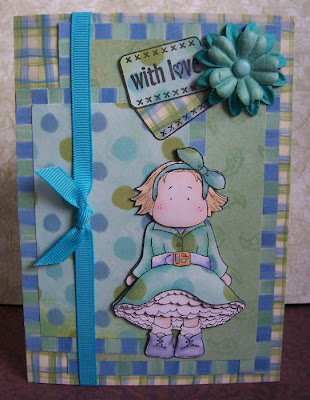 Now SBS8 have a challenge and its a sketch from CPS, used K& Co papers and not forgetting Tilda.
I've been really good have found some soppy verses for Mother's Day and sorted out the inserts and they're ready to go, plus some new Anniversary words for those cards too. The best sites I go to our imag-e-nation and verseit there was a couple more but I noticed they no longer working.
Posted by debby4000 at 9:37 AM

Gail Is This Mutton? said...

The flowers in the boot look so pretty. Great card!

These cards are just lovely. I´ve been looking around at your blogg. So many lovely things to look at.
Have a nice day
/Gunilla

You have been busy with all those creations, (I was browsing back over lots of your cards,they are all beautiful and so much dimension) Those Tilda stamps are just gorgeous, I haven't seen them over here, her little skirt looks so real, sorry Im jumping around from one card to another!) Enjoyed looking, thanks :0)

Love the flowers in the boot - great job!

Golly what beautiful cards you make... so much for a 'little bit'!! Thanks for visiting and DD is much improved. Hugs

Oh wow Debbie, your Mother's day card is just so beautiful and the colours are so pretty.
It's just perfect.

Ooo, those flowers in the boot are fab - much better like this than the original stamped version I reckon.

wow, way to clever with flowers coming out of the boot.

I love both cards Debby but I think the boot is my favorite it looks stunning!

Oh wow, I love these cards.

Love the boot card and the flowers look great

OMG!!! I sooo love that boot card!! I can not figure out how you are doing the little girls dress in the second card??? the layered look?? I REALLY like it!

Gosh those are both absolutely beautiful!! Kim sbs8

they are both fabulous cards! the flowers in the boot is inspired!

Fabulous cards, I love the flowers in the boot