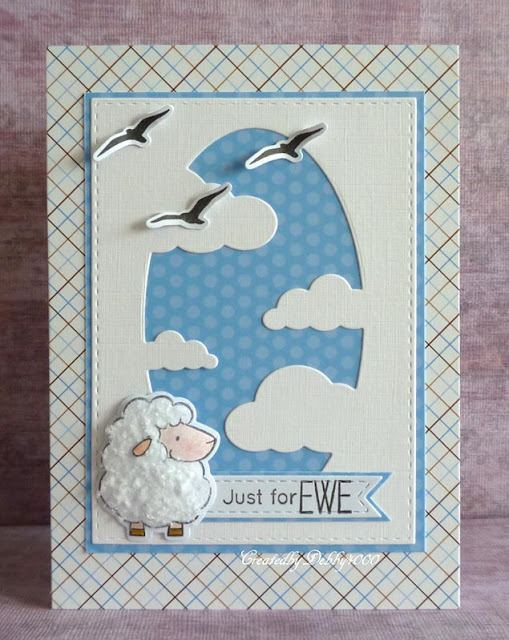 I have a few cards in my drafts waiting for them to be received before posting, in this case its for my brother. He's had to have a particular uncomfortable procedure and wanted no visitors while he recovered so I just wanted to let him know we are thinking of him.

I wanted it to be a little humourous hopefully to raise a smile which was why I used the MFT Sheep stamps and die set. My cloud is a new Memory Box die, I doubt it will be the last time of seeing it.

The birds are Simon Says Stamp Cloudy Sky stamps and die set, the papers are some old scrapbooking ones I decided would work for cards, I think it could be Pebbles but don't hold me to that.

So I starting a busy week with a doctors appointment this morning, since the flu like virus, my ear has been troubling me and its 5 weeks since it started I'm hoping it just wax.

Great card Debby and I'm sure your brother loved it

What a fabulous and fun card Debby and hope your brother is soon recovered, but I'm sure this will have been well received and wil make him smile. I hope your ear is sorted soon too. x

Will surely cheer him up, love the textured sheep.
Faith
x

A brilliant card Debby, that little sheep is so cute
Lorraine x

I am sure this fabulous card did the trick Debby. Hope you managed to get the troublesome ear sorted out xx