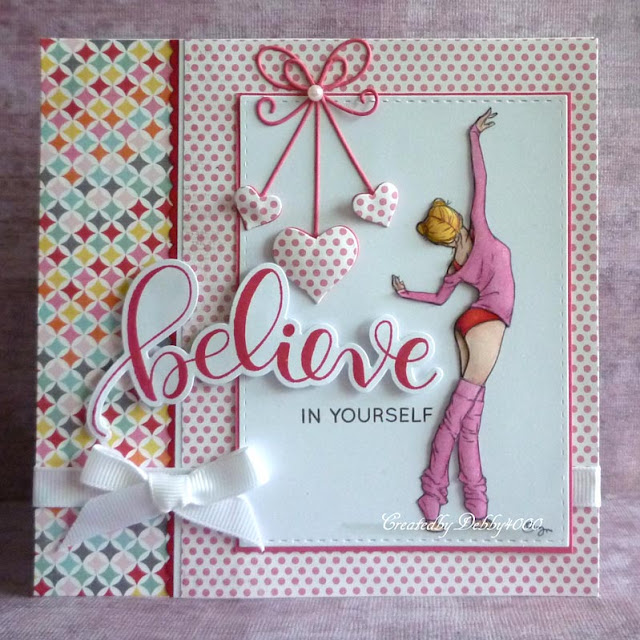 I like two thirds of my card but I've now decided that I don't like the colourful strip down the side, its well and truly stuck including the ribbon so there is now way I can do anything about it.

May have to do it again with a white panel, love the Hearts die which is a Memory box die with an added heart, the join hidden under the pearl

I stamped the Believe using Simon Says Stamps die and stamp set, I've used it before in scrapbooking.

The gorgeous ballerina is from Mo Manning called Ballet-Pratice she is a bit fiddly to layer but there aren't two many to do.

This is a beautiful MM image Debby which you have coloured and layered perfectly, and the background is extremely pretty with it and what a great idea to add an extra heart to the hanging hearts which are a wonderful finishing touch. x

Oh, I love it just the way it is! Spectacular!!!

This is gorgeous just the way it is. I love the colourful stripe down the side and the ballerina looks fab.
Lorraine x

Beautiful Debby. Love this to bits! The dimension is fabulous, she really looks like she's dancing across the page. Love the hearts and that fab popped up sentiment. Hugs, Wends xoxo

I am by no means an expert, but I think the strip down the left helps to tie in the red you used in various places. I think it looks wondeful.

Love this card. There is a gentle beauty about it.

Oh wow what a stunner!