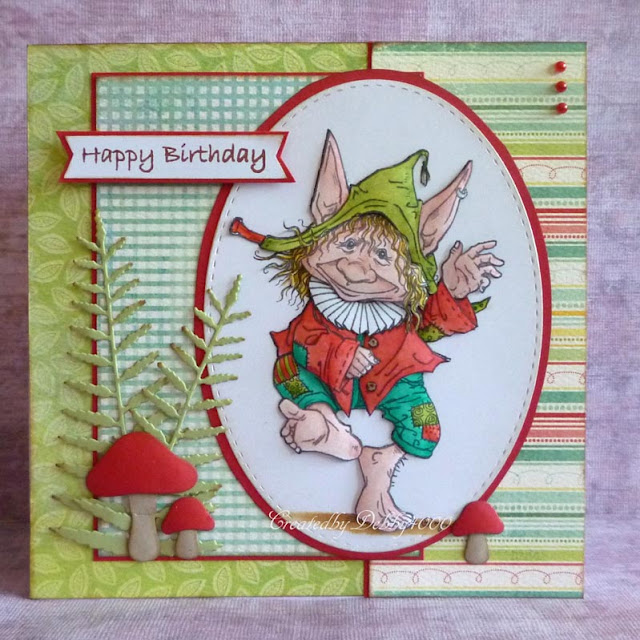 One of my daughters favourite films is Labyrinth and since yesterday was her Birthday I needed a card for her and Mo's Jerry has a look of Hoggle in his eyes.  When I started colouring I realised I was colouring him with a lot of green and turning him into a leprechaun, had to deal with them and coloured his jacket red!

The papers are some old scrapbooking ones that I decided would work better for cards. Tender Fern from Memory Box and the toadstool are Cottage Cutz. Thats it apart from the sentiment which was one that lives on my desk. I did blend some Old Linen with Inkylicious brush  round the image and sentiment to soften the stark white.

The DP2 challenge is live with a new challenge of Anything Goes so pop over and check the team.
Posted by debby4000 at 7:03 AM

A gorgeous image and fabulous card.xxx

I'm sure your daughter loved her card Debby its brilliant

What a great goblin image by MM Debby and you have made a beautiful card for your daughter. I love the papers and embellishments and so prettily coloured too. x

Lovely card. Made me smile! Thank you. Smiles. Jan.x

WOW WOW WOW LOVE this card, your daughter is going to be over the moon, I know I would be, I LOVE it. Love the mushroom and fern too.
Faith
x

Debby, I LOVE this card! The colors are so great and the theme is carried out with the papers you used. Great work, as usual. Marsha

SO cute and beautifully coloured!!!

I'm sure she absolutely loved this Debby! Fab image and perfect embellishments too :)