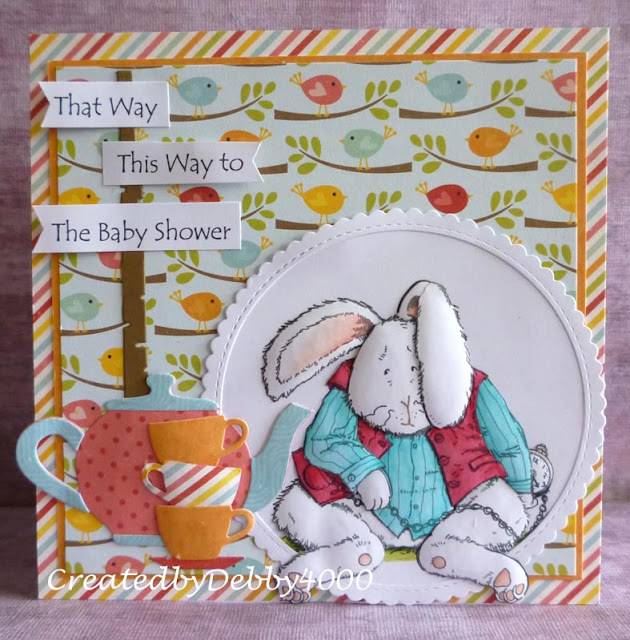 Normally for a Baby shower I used Mo's Baby Shower and Mother to Be but the baby shower's theme was Alice in Wonderland so I used the Late.

It meant I could use an old MFT die set which was the teapot and cups, I do have their latest one but it is larger. I then used a Memory Box Birch Tree die for my sign post. The words were generated by the computer but cut out and used Stampin Up banner punch (its retired) to make my fish tails. A square punch can do the same job.

There's always something I nearly forget the papers are some old Echo Park and the frame round my rabbit is also from MFT.

It's been a busy old week DD now can wash her clothes and keep things chill while sitting on her sofa just waiting on the cooker for Monday. I've also had to pack for the retreat at the weekend.
Posted by debby4000 at 7:14 AM

What a fabulous card Debby and it goes perfectly with the Alice in Wonderland theme with the cute rabbit and teapot and teacups, and I love the colours and lots of clever touches. x

Such and different too, love it, such a cute image and quotes.
Faith
x

Oh wow I love this, so much thought in it, the sentiment is fab and loving that rabbit and colours

This is gorgeous, love the rabbit, love the papers, love the design...love it!
Lorraine x

Love the papers on this one. Such a cute image, too. Great card, Deby!