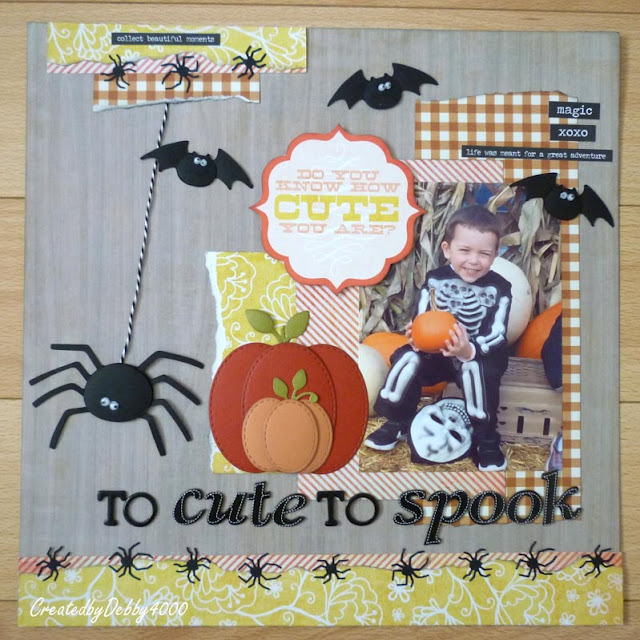 A break from Wedding and Birthday Layouts since Halloween is in the middle of next week I thought this Halloween layout would be best to post today.

The papers are I think My Minds Eye but not proper Halloween paper, the cute skeleton is a photo borrowed from FB a couple of years ago of my nephew but I knew I would scrap eventually.

I made this layout at the Retreat but I came with cricut made spiders and bats with their googly eyes already stuck. The tiny spiders are a Memory Box die and the pumpkins were made with Simon says Stamp Stitched Ovals overlapping themselves with a leaf die cut down for their stalks.

The cute printed die cut had to be used and love the title from a Pinterest layout so I had to use but I'm thinking the first to should be double O but its too late now to do anything about it.

I only stayed one night on the retreat, both myself and my Sister agree we wouldn't do it again but we begrudged paying an extra £30 per night just because it was half term and the Hotel was busy with Lego Land visitors. The extra travelling took a bit of toll on the body and we finished early on Sunday to go to my nephew's First Birthday is was an event which couldn't be missed.

A wonderful Halloween layout Debby, and I always find it so irritating that things like hotels and holidays are so much more expensive at half terms, infact any childrens' holiday times. x

Oooooh, I love all the cute details you added to make this layout really special.