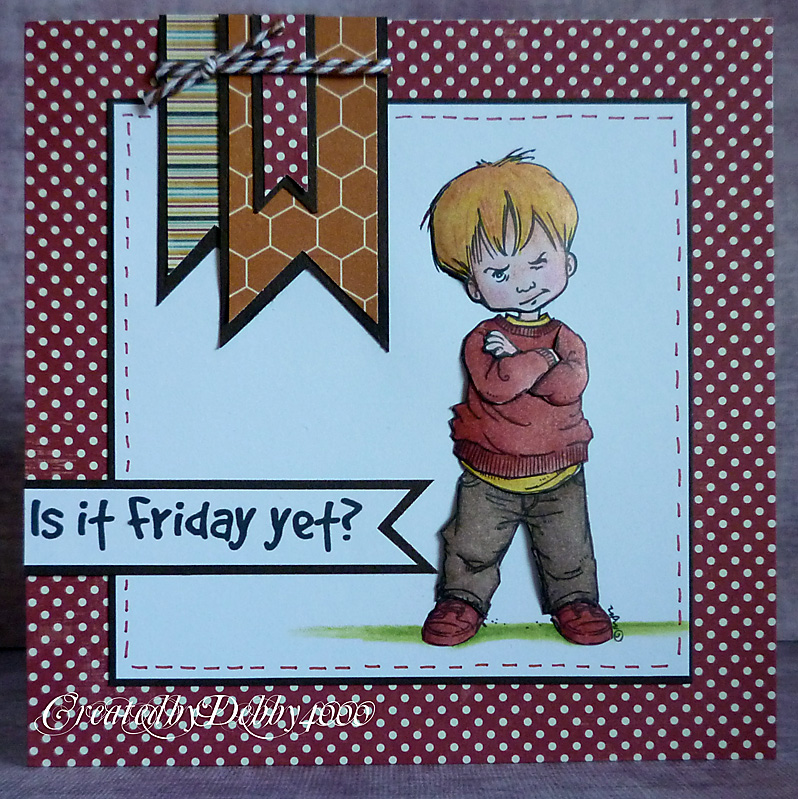 Have you seen the new images from Mo Manning, I've made a quick card for one of them called Stink Eye Boy. Since its a quick card its done in a CAS style.
I have some patterned papers from Lily Bee called Autumn Spice and just used some of the scraps for the fishtail banners.
Also used one of the fabulous quotes that you can buy as well. Now is the time to pick up some new and old images too. 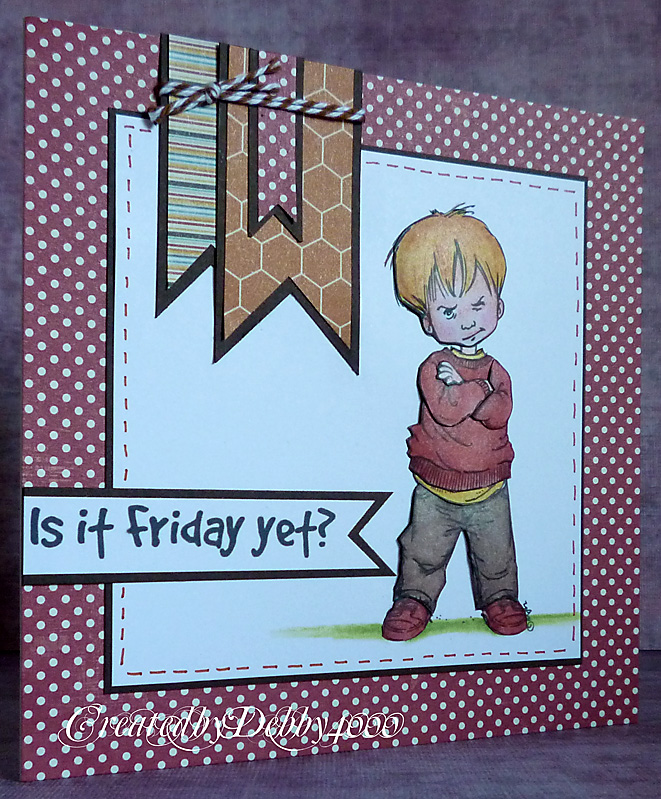 What a fab expression on his face Debby! Fabulous card design, love it! Susan x

Ooooh how Cute! What a Great expression!

Yep this definitely on my wish list! His expression is adorable!

Fabulous card! Such a great image, I love the papers and layout too.
hugs Sue xx

OMW you would not want to tackle this little man. Gorgeous card and l can think of a couple of little ones this would be just perfect for x Susan x

Another wonderful card Debby ( so glad I found you!!) and those papers are scrumptious!! xx

Debby this is gorgeous, fab image. I have a card like this to blog on Sunday and it is so similar in design, great minds lol. Joey xx

Ha!! I love this!! he is adorable and I so feel just like him right now!! So glad it is Friday!! xx

Another great image of Mo's - he could be a handful! I love the browns and golds you have used. Great finishing touches with the twine and the faux stitching. x

Yes I have seen the new digi's and unfortunately my wish list is growing fast, lol. Will have to get some soon before the offer runs out though. Love this image and your card is fab.
Lorraine

LOL!! This one literally made me laugh out loud. Love the image and your card is fabulous Debby.

This one makes me smile Debby!! I love your design and fun image! HUGS :)

This little guy is quite the little dude ... of course he's even more adorable as a result of your creativity.

Stink eye is stinkin cute just like your card and chosen colours Debby!!

What a beautiful card Debby.

What a wonderful image, I know a wee boy just like this, fabulous card Debby, hugs Kate x

He is terrific Debby..fabulous image and colouring and love the papers and design.

This is adorable, Debby! Love the banners and the cute image! Your coloring is awesome!

A brilliant boys card Debby. The image looks fab and I love his face!
Lorraine x

Fabulous card and love the image, he reminds me of my youngest son.

Fab card, and I just love the image. Perfect choice of backgrounds and layouts to go with it.

What a fun image - isn't he super.

This is a fabulous image and having two Grandson's I could find loads of uses for it just not that keen on the names she gives her images.
Fabulous card Debby.

Love your colours and design! The bold type sentiment fits perfectly.
I have a grandson just about this age - and yes he does look at you in this manner sometimes!

What an awesome image, your fantastic layout and colouring finishes it off a treat.

Came across your blog, This is so adorable. Love your cards.
Hugs, Heide

Heee, I know that feeling all right! Love your little guy :)

so stunning debby.fantastic fun image and i love your design :D

What a fab image! gorgeous card!