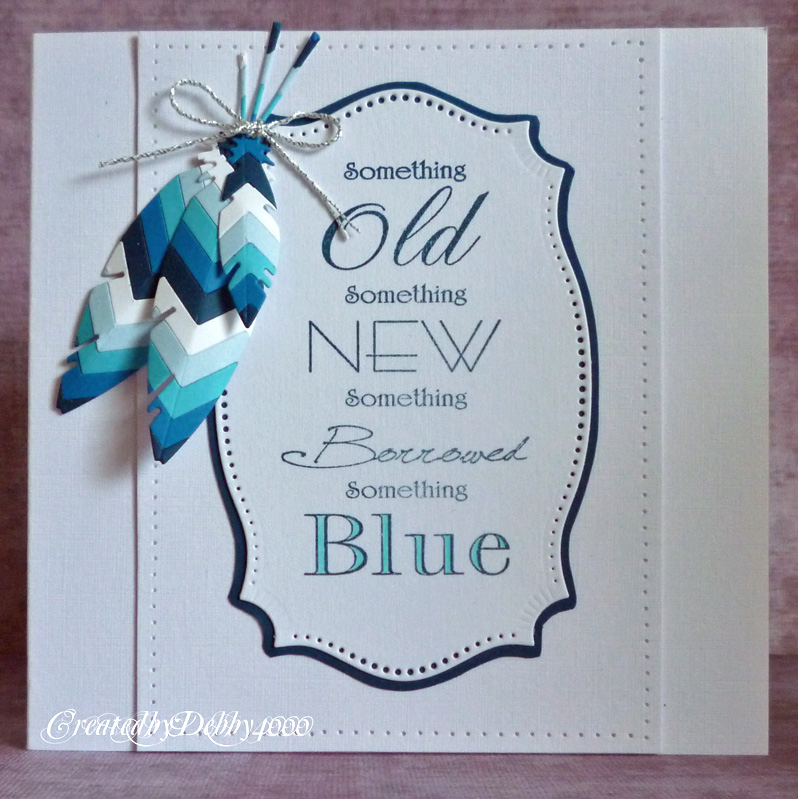 I wanted to join in the Less is More Winter Blues challenge but all the ideas I had, I've either done them before and or someone had made a similar card. On the table beside me is a box of Simon Say Stamps dies and in there are the feathers. I wanted to use a stencil over them but I just wasn't in the right frame of mind to get messy.
I got out different shades of blue card and using MFT zig zag/chervons die cut out 3 of each colour and of white. A bit of advice here stick some dst behind the card and careful position the die along it so you will able to stick the down the zigzag. I went through quite a bit of the tape in the Xyron to make it sticking on the back.
I used a thin bit of paper to layer my zigzags on the last three I cut in half and layered half the side till I have enough to use the feather die.
After a hunt through must of my stuff I found the Inkylicious stamp that I brought from Ally Pally. Once stamped I just coloured the blue word and put my feathers together with a bit of silver twine. I used a spellbinders die to cut out the sentiment and then used to it to draw round and hand cut the mat.
Paper pricked round the edges of a white mat and stuck it down in the centre and added everything else on top. 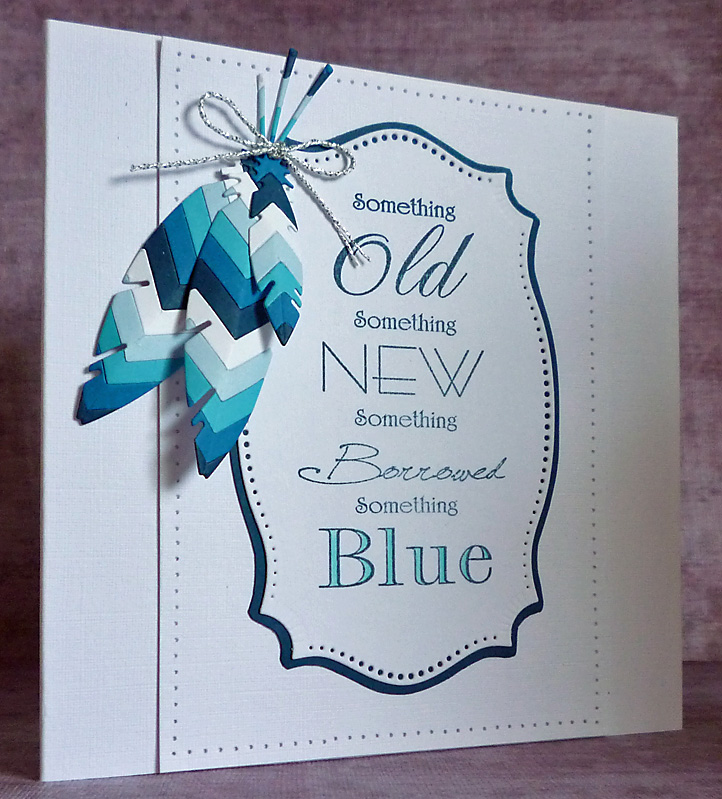 It still wet and windy and the radio is constantly tell us which roads are being closed and Guildford even made the telly with their metal river defences to save the lower High Street from being flooded again. But at least we are able to go out even if it is in our wellies, my heart goes out the USA where they have record freezing temperatures.

What a beauty, would never have thought feathers could look so good! Jx

Stunning card Debby, a really wonderful design, I love the way you have done the feathers.
hugs Sue xx

Wow Debby, that is wonderful and I bet it took some planning!! xx

Wow, this is great.
Hugs
Melodie

I love the feathers Debby, they look awesome! x

This is fabulous - those feathers look incredible!
Rebecca.

Absolutely fabulous Debby love those feathers and the whole design of the card. Susan x

Gorgeous card Debbie. Don't think I would have the patience to do the feathers like that!

Fabulous Debby - those feathers are gorgeous!

Love this Debby. Those feathers are fabulous
Anne x

This is really beautiful Debby, love that feather effect.

I love the idea of using the chevron die with the feathers with all the different blues which make a great accompaniment to the lovely large sentiment. The paper piercing finishes it off beautifully. x

Gorgeous, what a clever wonderful design for the feathers! Hugs,

I love those feathers, such a great use of dies & cardstock!!

This is a fabulous card Debby, your feathers are gorgeous, such a great idea.
Pauline
x

A gorgeous card Debby. I love the colours and fab feathers.
Lorraine x

Very clever way to make the feathers, love them.

simply stunning debby.i love this inkylicious stamp and the feathers are fab :D

So elegant Debby... love how you've used the feathers!

This is a gorgeous CAS card Debby. Love the sentiment and the feather is fabulous.
Hugs Sharon. x

Stunning card, the feather are fabulous.

Hi Debby this is just gorgeous love the feathers!!

This is amazing Debby, those feathers are just terrific, but then I would never expect anything less from you!
Thanks so much
Chrissie
"Less is More"

Fabulous!! I love those feathers, you certainly inspire us Debby.
Hugs Mau xx

WOW!!!! Another wonderful CAS card!!!! I LOVE the feathers! So beautiful with all the shades of blues. Hugs, Brigitte