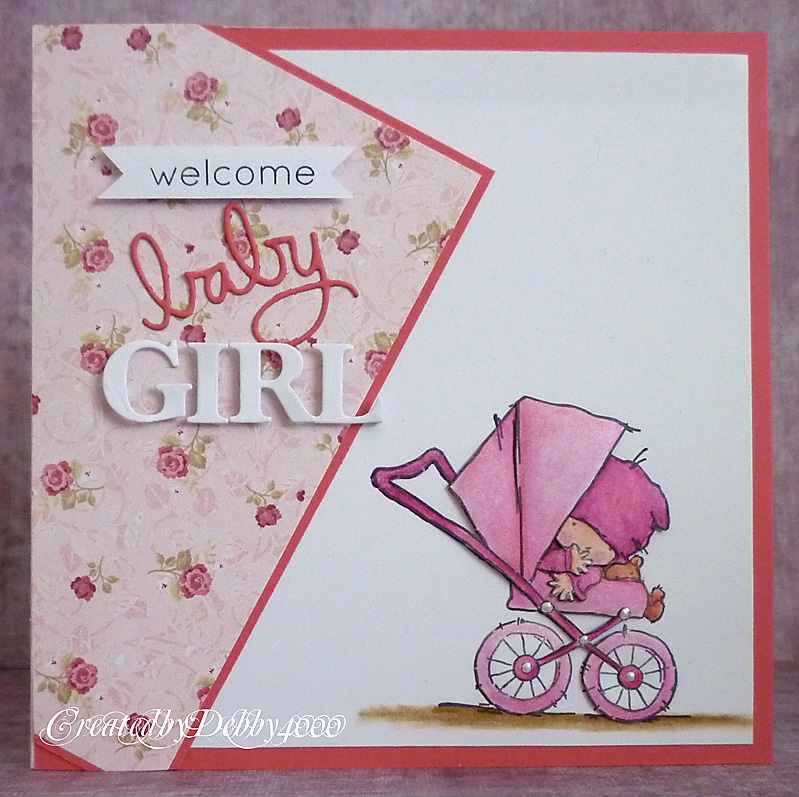 The challenge on Less is More is for New Baby and its a not a one layer week thank goodness for that. I was inspired by the old sketch at Freshly Made Sketches although I think my angle of the patterned is not quite the same .
Of course the adorable image from LOTV and she was a bit fiddly to layer but she was well worth it. The patterned paper is from LOTV too.  Girl was using Memory Box Alphabet die and the rest of the sentiment was using the Baby die and sentiment set from Simon says Stamps. 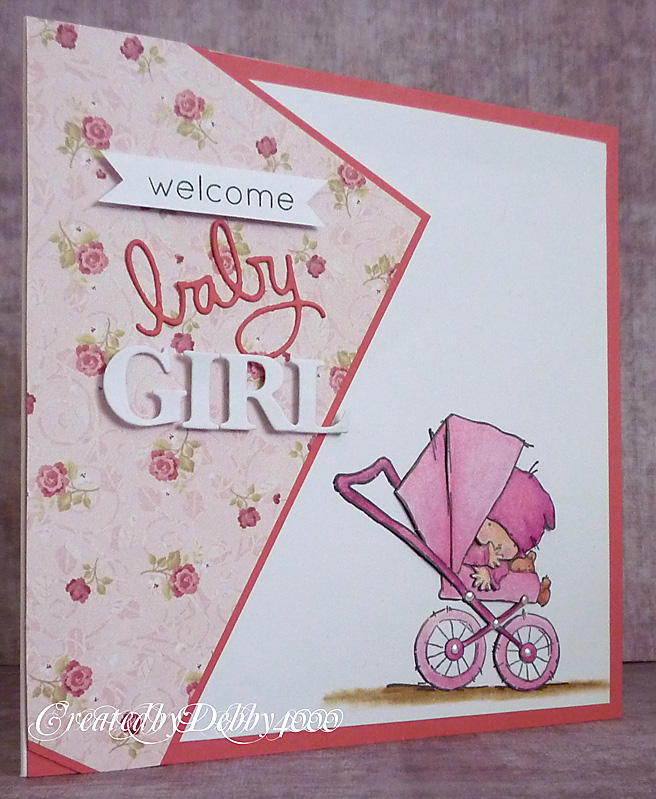 It was a good and bad day yesterday, first my DD got herself a new job and while she popped home to write her resignation letter got a call to say my Dad had a fall. So she dropped me off there, he was bit shaken and bruised but OK. He has become very frail and I'm not sure he is coping so well and once we have Mum settled in a new home (her nursing home is closing) we may have to sort something out for him.

what a delightful card Debby. Love the interesting shape on the card,

Another delightful creation Debby and a very effective layout.

Gorgeous! What a fab idea to angle the paper like that!

Hope your dad is ok, and that you get your mum settled soon too! x

This is so sweet, love the image. Hugs, Claire x

Love the addition of the paper Debby and that image is so sweet. x

Fabulous CAS card Debby such a sweet image. Hope your Dad is ok , its such a worry. Susan x

Wow, this is so cute.
Hugs
Melodie

A gorgeous card Debby. Love the design. If you ahve to 'sort something out' for your dad wouldn't it be good if they could both be together again.
Beryl xx

Love the design of your card, Debby.
Hopefully your dad is doing fine.
Hugs, Anja

What a cute card! I love the rose paper and the image is just too sweet.

Oh Debby... this is adorable!!

such a sweet card Debby, and I have that paper in digi format - it doesn't print out with the pink background, more neutral .. .. I have it on my desk planning to use soon!
hugs, annie x

Love the layout Debby, what a fab card!
Jane xx

A beautiful card with a fab LO and such a sweet lotv image! hugs, Marlies

Fabulous as always Debby.
Hope your Dad is ok sweetie, it's terrible how frail we get with age isn't it?
Congrats to your daughter too
Anne x

Beautiful baby card, Debby! Great layout and sweet image! Sorry to hear about your Dad's fall. Glad he is OK.

Such a sweet card Debby. I'm loving the look of the angled papers on the cards lately! Yours is perfect.

This is a cute image and the way you have angled the paper/card layer is interesting and just a little different. x

Glad your Dad is okay Debby...love your card today..love the design and papers and the wee pram is so cute.

Oh! Your card is just adorable! Love the image and crazy about the dp. What is LOTV? I am in California and I do not recognize the initials. Is it something that can be purchased on line?

If yu wouldn't mind writing me at dollar0831@verizon.net and telling me I would appreciate it.

I love your work and look forward to your postings each day! Thank you for sharing your amazing talent!

so gorgeous debby,totally adorable image and your design is beautiful :D

This is soooo cute! LOving your design Debby.
Chrissyxx

Hi Debby, Love this LOTV image. Didn't get this one this time. Fantastic card and beautiful papers. Hugs, Carol S.xx

So sorry to hear about your dad's fall, Debby. Heartfelt thoughts go out to him. I'm sure it was scary, even though he wasn't badly hurt. Cute card today.Love that sweet image.

So adorable! I'm glad your dad is ok.

I'm sorry for the late visit!
This is wonderful Debby...as fab as ever!
Thanks so much
Chrissie
"Less is More"

Awwww, what a cutie!
Hope your Dad's OK after his fall.

I just love the design of your card, Debby! Yes, I recognize the sketch and the angle of the dp is different, but that is what I love about this! It leaves just enough room for that adorable image! Thanks for your inspiration!