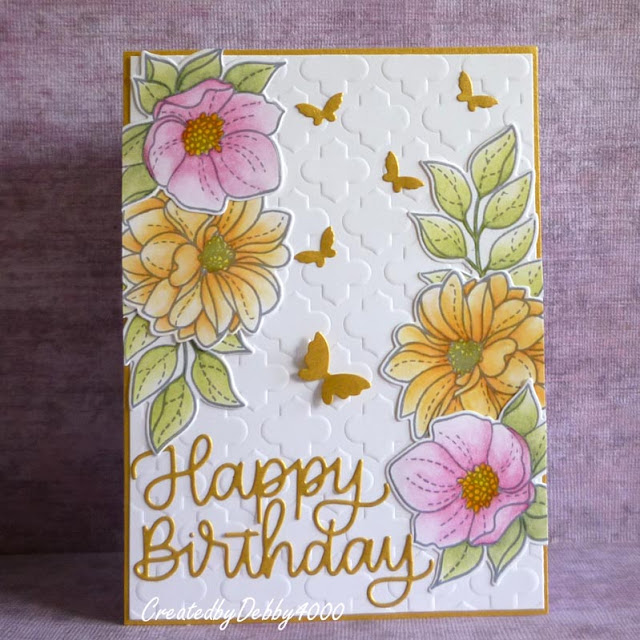 This was a bit of an experiment, there have several designer using Polychromos and singing their praises well I've been using them for years. They are using a feather technique which you can do with copics too. I wondered whether I could colour a flat image but to colour to give it some depth. Not sure I've managed it but still please how it turned out.

I used the Simon Says Stamp Moroccan Tile Stencil but used it to emboss with. I cut out the Simon Says Stamps Birthday Script die with gold card. It was then placed my flowers using the CAS(e) this sketch 269 to inspire my card. Once I was happy I stuck them down and trimmed round the card and then added a bit of gold round the edge.

I still had a large white space in the middle and I couldn't leave it and I cut the Simon Says Stamp Flickering Butterflies in gold. The larger butterfly I raised but the tiny ones I stuck fully down.

I think it would be interesting if I made the same card but layering the flowers which is really my thing, will have to put that on my list to do.

The colourng is lovely, very pretty card. Hope you are well x

The morrocan tile stencil is the perfect background for your beautifully coloured flowers Debby, and the pretty gold butterflies, sentiment and background layer are so pretty too and complement the flowers really well. x

Beautiful card! I love those pretty flowers and embossed background.

Beautiful! Your flowers are so pretty :)