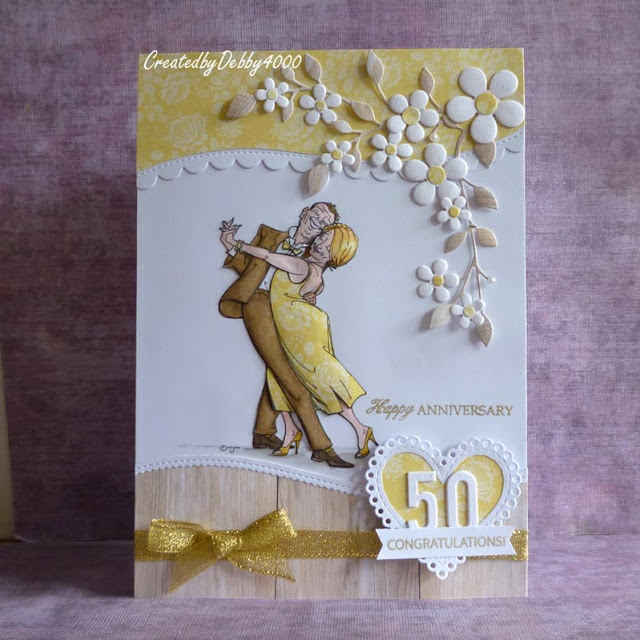 I thought I had schedule this post but somehow it got forgotten obviously thought I would have time yesterday when I got back off my hols. Since summer finished the day we arrived back I quickly put some washing in and worn myself out sorting it all out.

Back to the card I've used Mo's Cheek to Cheek image for a previous Golden Wedding card, probably the same paper but it was a square one with not much space to make it pretty. So I made an A4 card I think thats what its called basically it a piece of A4 folded in half.

The papers are too short for this size card so some curved Scallop dies one to bring interest and two to add some patterned paper. The leaves are Memory Box, I think are called Lavish Foliage and the die is a second hand one brought on e bay the seller or myself have no idea whose it is.

My heart is an retired Heart die from Simon Says Stamp but I've cut out the centre to add a bit of matching colour. The gold sentiment on the image is from LOTV retired again and I think the fish tail banner sentiment is Simon says Stamp Messages for Everyday

This card was for my Sister and her Hubby who had the 50th Wedding Anniversary while we were away, bad planning on my part. 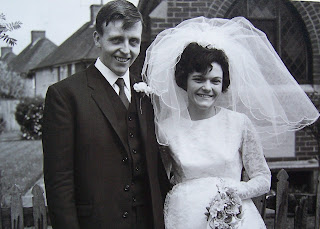 This is absolutely gorgeous Debby and your sister will have adored it with those beautiful flowers and leaves with the really pretty gold dp, and the curved scallop shape, and lots of fabulous dimension on the wonderfully coloured MM image. This will be put in a box and kept for ever. x

Striking likeness to your sister. This is a lovely card which is A5 size I believe you meant. Great embellishing.

Oh this is so nice Debby. I love the way you did this card!!!!

Oh Debby, such a lovely card!!! I really love it!
Martina

OH! how absolutely wonderful, I love EVERYTHING about it.
Faith
x

Beautiful anniversary card with that cute couple. Love the design and flower details.

Such a lovely card...perfect for this occasion. Love the gold ribbon you've chosen!

A wonderful card Debby and I loe the yellow colours and the flowwrrs are beautiful..a super design with that happy couple..

Really beautiful Debby and I bet your Sister loved it xx