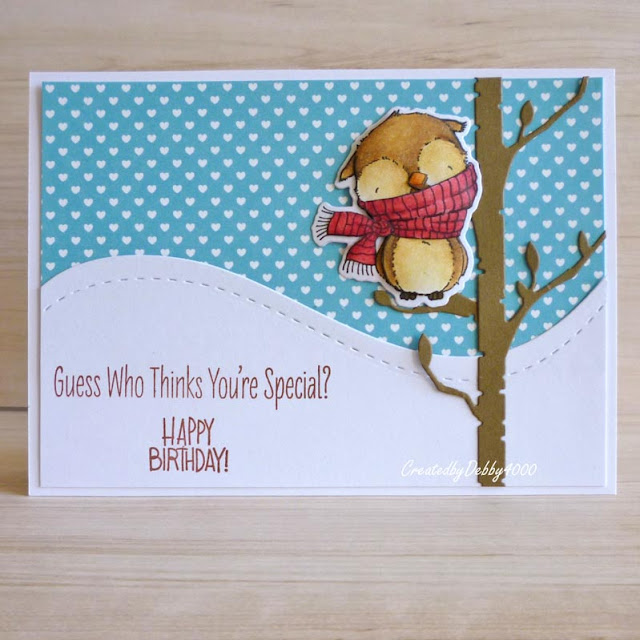 Not much was going on in my craft room last week but at the beginning I did manage to use my coloured owls, this was the first card I made with them.

I'm using a couple weeks old Sketch Saturday sketch that I had turned so it would work with the Simon Say Stamp Birch Column that I trimmed to make a single tree. I used their Slopes and Hills die to make my snowy background which I used the MFT sentiment from Warm and Feathered
Hugs.

The Happy Birthday sentiment was from Simon says Stamp It's No Secret  which I brought to go in circles. The heart sky was a bit of MFT Sweet Stack that was left over from another card.

By the way the Red Cardinal's post I missed a part of the wings when stamping but because it still looked like wings I didn't really notice it till after I made the cards.
Posted by debby4000 at 8:53 AM

So incredibly cute, I love the sentiment too, hugs Pops x

This is a cute image Debby and I love the little hearts on the dp you have used for the sky and then the stitched slope and tree are both lovely, and a great sentiment to finish it. x

AW! this is such a lovely card, also love the sentiment.
Faith
x

He is so cute Debby..gorgeous fun scene..

This is gorgeous Debby, that owl is adorable xx

Very sweet card, but those snowy hills remind of the cold and snow we have here in Minnesota right now. Brrrr!

So cute, lovely layout too, those papers are faves of mine had to buy another pack