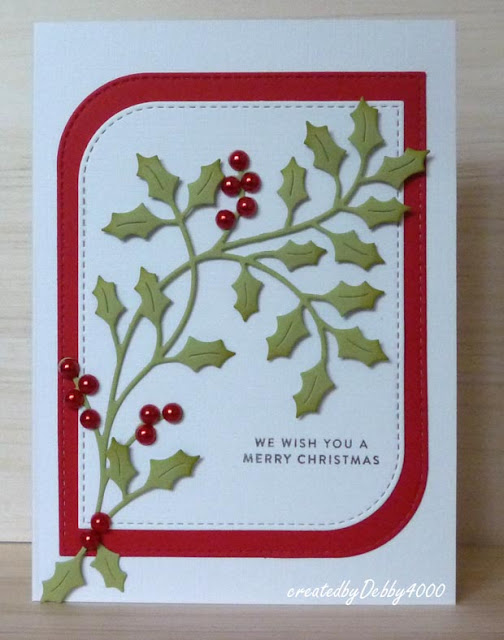 Starting as I mean to go on I've made a start on Christmas cards 2019 and I used the ABC Christmas Challenge B for Berries to inspire me.

First of I decided to use the Penny Black Holly die in fact I cut two of them. This is so I could cut out a sprig of holly to give the first card a finished edge. The join hidden with some pearl berries. The only problem I have with this die the berries are large and you have to use large pearls so it won't go through  normal post.

The frame mats are MFT which I was disappointed again that they layered with a large border, sentiment is Simon says Stamp Christmas Tiny Words. 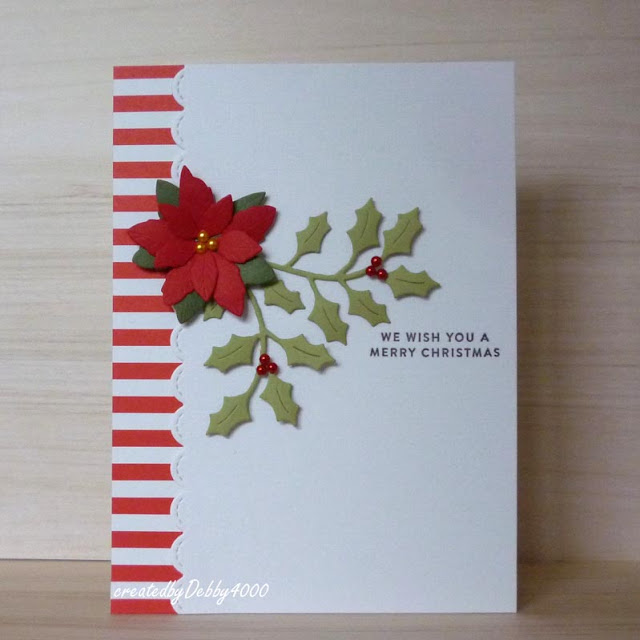 I had this sprig left over so I used it for a similar card I made last year. Knowing the berries were large I cut them off so I could use smaller pearls.

The poinsettia is Simon says Stamp Poinsettia Parade love the size of this flowers. The border on my white mat is an old Lawn Fawn Stitched border die and again the sentiment is the same as above.

Not sure why my white is a bit grey and fuzzy I think the camera's battery is running out but also it's been grey and miserable weather so lighting is another problem at the moment.

Two beautiful cards Debby and I particularly love that holly die from PB nd keep debating whether to get it or not as I haven't seen another that I like better. A great idea to cut the berries off and use your own smaller ones too. I love the red accents on both, but the poinsettia and stripes on the second with the stitched scalloped edge just has the edge for me. x

Both cards are beautiful. Love the small poinsettia.

These are really lovely Debby xx

What stunning cards Debby, I love the berries theme and the designs are fabulous, Kate x

Your cards are both beautiful - what a great start to your Christmas cards. I especially love that red stripe on the second card.