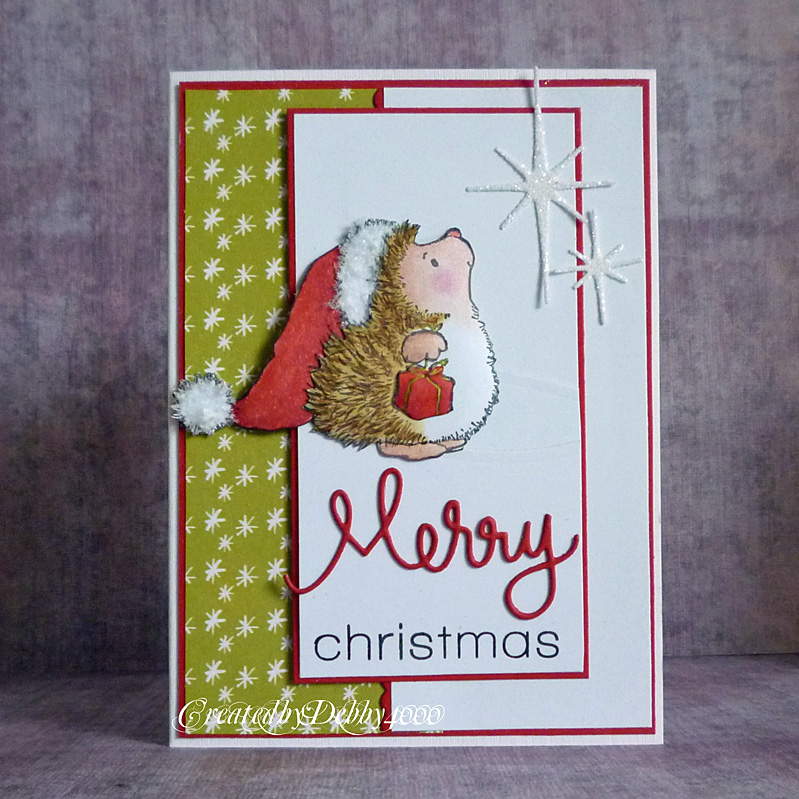 I'm sorry more CAS Christmas and a wonky picture too but at least its a Penny Black. I found this in my postbox, Ok it came in a parcel with other things that I may have ordered!
I saw the sketch on Mojo Monday and thought that this would work since Hedgie has already been on the Quality Street and had to go out for a new tin.
Although you can't see it there are valleys of snow using Spellbinders curved border but because I had to straighten it in photo shop, I lose a bit quality which doesn't help my poor Hedgie who looks floating because you can't see what he standing by.
The stars are Memory Box and the Merry and stamped sentiment are Simon Says Stamps.
Well the tree is finally up just have to put my daughters very large box of Disney ornaments but was shattered by the time we have put up lights in the window and put out all the santa, also I've a few Disney ornaments too.
Apologies also to everyone who usually received comments from Me if you have a pop up comment box which everyone (me included) prefer, I'm sometimes having issues commenting, like it won't let me type anything. But it doesn't happen everytime and its not the same blogs but very random.

A real cutie Debby! I got my tree up yesterday two! Susan x

Awwww such a sweet image and I love your fabulous design.
hugs Sue xx

Adorable stamp Debby (I keep finding things on my door mat too, and I'm always amazed how they got there!!) great paper and I love the stars xx

Very cute image. I haven't had any problems commenting, change mine back to pop up as I much prefer it and had an appeal to put it back from one of my regulars x

Your card is simply gorgeous! I'm having 'issues' with Blogger too, Jo x

Love it Debby, PB Hedgies are the best!! Blogger is playing trick again. Suddenly we all have to proof we're not a robot and typ numbers but I found out that you can simply ignore that and just publish your comment...as long as that's possible which indeed sometimes is not the case GRRRRRRR!!!

Such an adorable card Debby, how wonderful to find that cute little Hedgie in your postbox!
Pauline
x

This Hedgie is so cute Debby, and the starry green paper, the added stars and that sentiment are such pretty accompaniments. x

He is so cute, a gorgeous card Debby.
Have a lovely weekend
Lorraine x

This is so gorgeous Debby. I have found that if I just type my comment and publish as usual and ignore the verification that it does post. In less someone really has got Word Verification on of course. It is so annoying for everyone.
Hugs
Cathy
xxxx

Oh my goodness...he is such a sweetie! Wonderful card, Debby.
Off to have a catch up on your other posts. Once we are moved in January, I promise to visit more evenly! I seem to always be catching up lately.
A sea of moving boxes fills my dining room at the moment...we are taking a break from Xmas decorating this year. First year we have ever not decorated the house and gardens. Feels weird but probably a goodi dea as it gives up more time for the move preparations!

Those chubby little hedgies are always so cute. Full of Christmas cheer! Hugs!

This is so cute Debby!

Such a cute little hedgie surrounded by a fab card!

Hi Debby. What a fab image. Your comment about arriving in a parcel made me grin as I think we've all been there. Love the card x

This card is simply "adorable".

I don't know why you have to apologise for your CAS cards as they as just as brilliant as your other cards.
Such a lovely image and a fabulous card.

Your little hedgehog is so adorable Debby and I love the design.
Enjoy the rest of your week.
Hugs Sharon. x

Hi Debby, I love this sweet card! How lovely this little hedgie appeared in your postbox! That did make me smile!
Hugs Lynsey x

Extra special and sweet! The holidays are the perfect time for CAS!

Gorgeous card Debby, I like the adorable image and the papers
Kevin xx

Morning Debby another great card it's so cute. I've been having trouble too commenting just thought it was me.

That is such a sweet hedgie image, and you've colored it so beautifully (as usual). Love how he's looking at the star.

How cute is that hedgehog Debby, what a sweet little thing he is, I love your card!
hugs Jacee
Simply Paper Card Design

Such a cute card