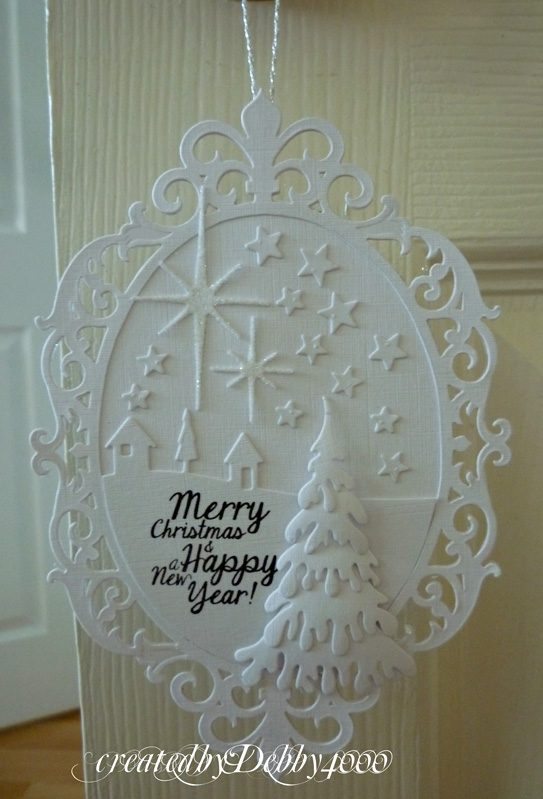 Time for the last challenge of 2014 for Everybody Art Challenge, this week its for a Frame. I decided to use  a Spellbinders frame that when it arrived I realised that it was larger than I expected.
But then I thought about using it for an ornament. I cut it twice but one of them I drew round the inside and used my craft knife to remove the centre but I used this to cut out the houses.
I haven't used this Dee Distinctly tree die this year so I thought I better use it but I cut out the large one and decided it was too big so this is the smaller one.
I then cut out the Memory box stars and added glitter to them but I only used glitter on these stars so they will stand out among the other stars.
Added a sentiment since there was some white space and I was at a lost to think of what I could put there.
Of course the most tricky part of this ornament was trying to find a place where I could hang it and have good light to photo it.
Do pop over and check out the team, also I hope you can join us this week. The challenge will be back in the new year on the 6th January.

Wow this is just stunning as an ornament too. Loving the all white.
Hugs
Desíre
{Doing Life – my personal blog}

This is stunning Debby, the frame is so beautiful and I love the scene you have created.
hugs Sue xx

Wow, this is amazing! All in white: I love that!
Lia xx

So stunning Debby! There's something about white on white... always appeals to me!

You really are the Queen of W on W Debby, this is absolutely stunning.

This is ever so pretty and would look wonderful hung anywhere!

Wow this is stunning, what a fabulous ornament to treasure

Gorgeous - love how it is all white but each shape stands out - stunning!

Love this, so elegant!

This is really pretty!

Absolutely Gorgeous!! That frame is a real must have.......you have a lot of answering to do Debby. I blame you everytime I tell hubby I need a new Die.....lol

Debby, this is so beautiful and perfect for a tree decoration. I think you may have inspired me to try something new, and trust me, that's something that doesn't often happen.
I love visiting your blog your creations are always stunning, I'm sorry I don't often comment lately (real life gets in the way) but I'll try to do better.
Love and hugs, Chrissie xx

this is gorgeous debby!! I love it! You have made some brilliant makes this year and I look forward to what you're going to do next year! Merry christmas xx

Absolutely fabulous!
Thank you for sharing with us, throughout the year, their talent and their creativity.
Merry Christmas!

So GORGEOUS, I have to laugh though, you always sound like you are not happy with what you have done and EVERYTHING is just fabulous.

Debbie, this is STUNNING, Love it! Hugs

love this Debby. Great thinking outside the box on this one
Anne x

Love this, it is fabulous Debby.
Lorraine

This is just absolutely gorgeous Debby!! ;)

After seeing your beautiful ornament, I was imagining a Christmas tree filled with white ornaments like this, but with different little scenes on them. Wouldn't that be pretty? A LOT of work, but pretty!

Oh my, this card is beyond "Amazing, Stunning, Gorgeous, Beautiful" !! I'm not a big fan of one color but this just goes way beyond Beautiful.
I think a little sparkle on the tips of the trees etc would really be OUTSTANDING.... Keep up the great creativity!

Oh my, how lovely, this is so gorgeous Debby, I love it!
hugs Jacee
Simply Paper Card Design

This is beautiful Debby, so elegant.
Pauline
x

absolutely stunning debby.gorgeous details and the white on white design is beautiful :D

A beautifully designed ornament Debby. Lovw the all white too. Hugs, Carol S.xx

This is a gorgeous ornament Debby, love the cut out scene with the houses and trees.

My compliments Debby. White on white just plain scares me. This is beautifully layered and constructed. What a treasure! Hugs!

Debby this is stunning

This is a real stunner Debby.
Hugs
Cathy
xxxx

Wow, this is s beautiful WOW ornament Debby, and all those dies are lovely. x

I love this! All white, but lots of depth and definition. Absolutely gorgeous!

Oooooooh I love this White on White one too!