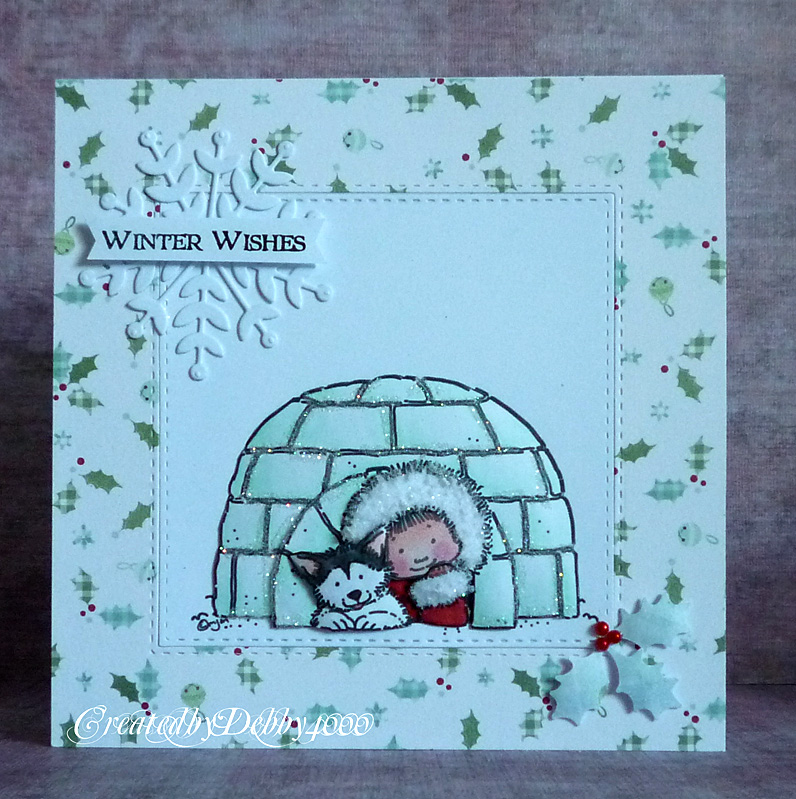 I have several Christmas images coloured and I've decided to use the ones that are clean and quick.
I cut out the centre of the pattern paper with the Stitched Squares from Simon Says Stamps so I would get the faux stitch on the patterned paper. I also cut out the image with the same square so it would fit inside the patterned paper.
Of course my adorable image is a Mo Manning Igloo and is so easy to colour. Martha Stewart Holly punch for the corner I did cut out two and use half of one to make a three leaf Holly.
The Snowflake is Rylynn from Simon Says Stamps but the sentiment is LOTV.
Well I attempted to make everyday cards yesterday failed miserably and took up my crochet hook instead.

Love the card Debby, such a cute image

Absolutely fabulous Debby! Such a darling image and love the CAS look.

Maria x
ps. how did you make the faux stitching ?

So simple, so sweet and sooooo pretty.

A wonderful card Debby, such a sweet image and pretty papers.
Pauline
x

So lovely is your card x

Absolutely gorgeous and such a sweet image!
Rebecca.
x

This is gorgeous Debby, such an adorable image and I love the design.
hugs Sue xx

Sweet card with this cute image. Love how you have done the backing too. Hugs, Carol S.xx

Evening Debby what a lovely card I love the image it's so cute. And the design and the colour is wonderful Debby I love to look at your blog Coast your cards are out of this world.
I'm looking forward to see what you will have for us in the new year.
Merry Christmas Debby xx

I Debby, this is a wonderful Christmas card!
Hugs Lynsey x

I love that stitched square. I am putting some of those stitched dies on my wish list for 2015!

Love it it is just the Sweetest Card!