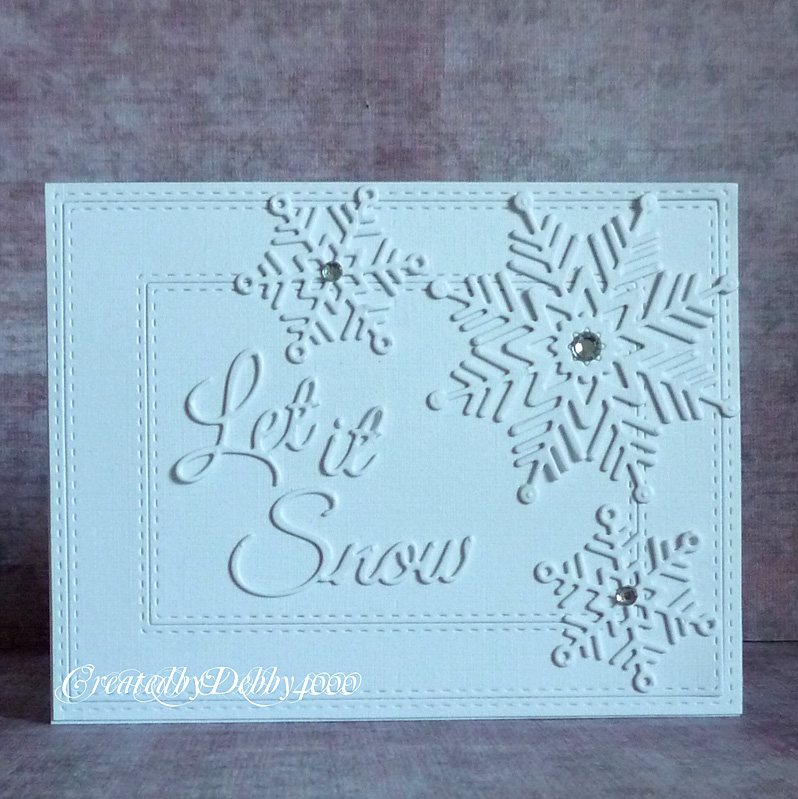 I need some quick Christmas cards since I've received some not on my list, Hubby says he needs a couple more and DD has asked if I have some spare.
First off I thought I will use the Stitched dies that I brought from Simon Say Stamps these are the rectangle ones.
My first card I realised I used Linen card and therefore the stamping idea had to be shelved because its a bit and miss with a texture card but I wasn't going to bin it. So I used Simon Says Stamps Alexis Snowflake and Maryann snowflake twice for each snowflake.
I then used the Let is Snow from Penny Black Joyous Wishes and yes I used it twice which all help for it to pop out of a white background. 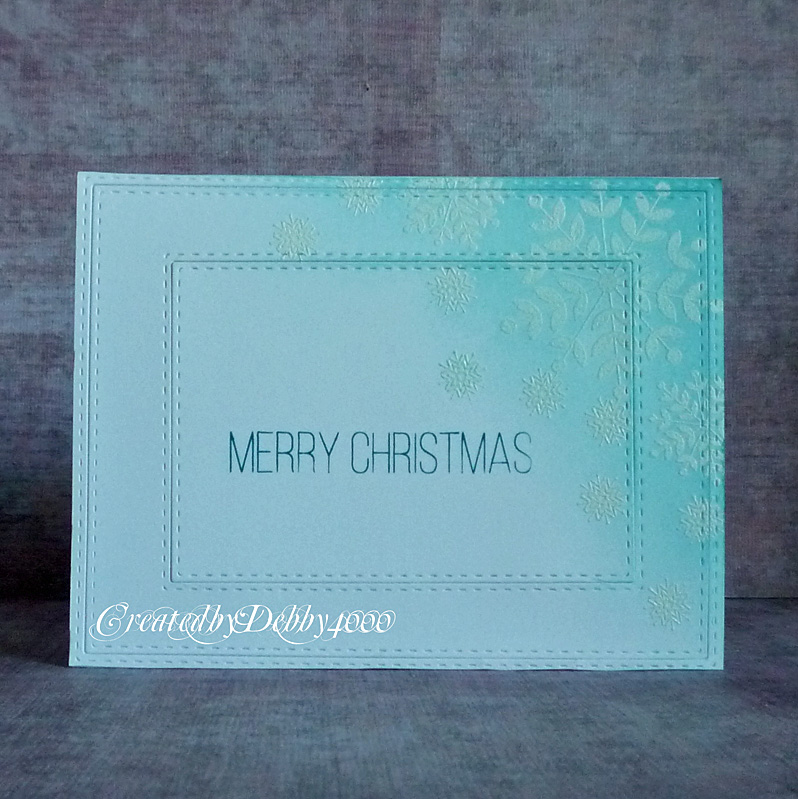 Here's my bit of failure I tried to burnish the stamped and embossed Snowflakes which is Simon Says Stamps Lots of Snowflakes but I rubbed too hard and took off some of the colour. The sentiment I used the Be Joyful set.
Both cards I've used the sketch from CAS(E) this Sketch and if I'm quick there may still be time to enter

I love these cards ! great done ! thanks for sharing
greetings
martina
x

Gorgeous cards Debby I can't see anything wrong with the second one! Susan x

Lovely CAS cards Debby. Particularly like the first one.

Gorgeous Debby, so pretty and I do like the 'failed' one also, looks good.xx

A gorgeous CAS card Debby, and I just adore the WOW with just those sparkly centres to the snowflakes, and even your so called failure is very pretty. x

wow I love that white space and those stitches are awesome

Oh, these are both so pretty! I love the white on white in the first one and the gorgeous inking in the second one! Fabulous takes on the sketch!

Both cards are gorgeous Debby..beautiful.

Stunning cards Debby, I love the WOW one, but then I love the gorgeous blues on the second one as well.
Pauline
x

These are stunning Debby, your designs are so beautiful.
hugs Sue xx

So beautiful they both are x

Beautiful cards, Debby. I love all that stitching!

These are gorgeous but love the one with the stitched rectangles, fabulous snowflakes.

Lovely white on white card and the second card has just the right amount of blue, perfect!

They both look gorgeous to me. Love the designs. Hugs, Carol S.xx

White on white is just a big favorite of mine!
Love both your cards!
Great to see you at CTS this week!

I love them both. The second one has such lovely and subtle shading.
The first WOW one is great with those fabulous dies!