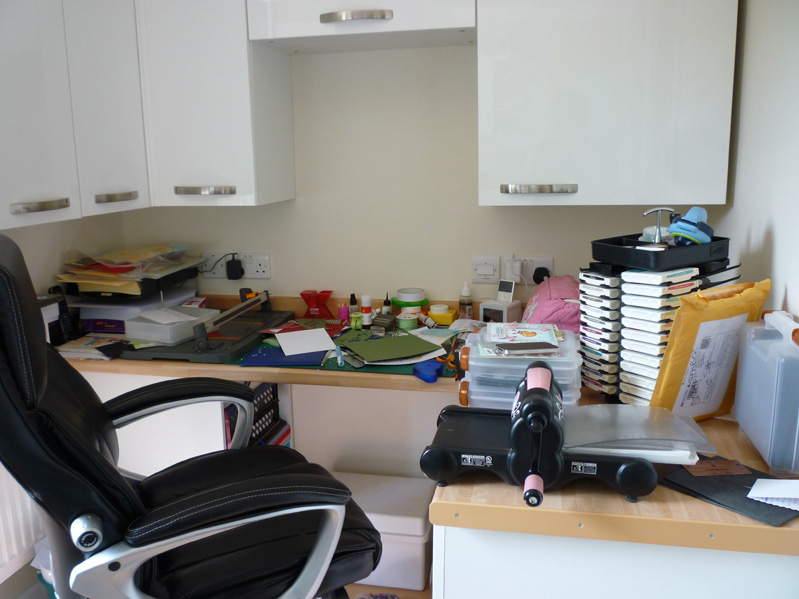 I've had a few people ask how I'm getting on with my new space, so I thought I'll join WOYWW this week. So here's my desk in action. I've started to become use to my Smaller space it does have its advantages like I rarely need to get up even using the Big Shot I can now use it sitting down.
I've still have some sorting to do and I'm forever moving stuff so that the things I use a lot are easier to get too. I'm still struggling to work out where I've put some stuff. Had a right two and eight about where my embossing paste was, looked everywhere.Eventually found and moved it somewhere more accessible if only I can remember where!
Now if the camera was a bit closer you would see the envelope I've written in large black letters Stamptember on, yes Simon Says Stamps are once again have a month long stamp party and inside that envelope are some new goodies that they have kindly sent me in advance. 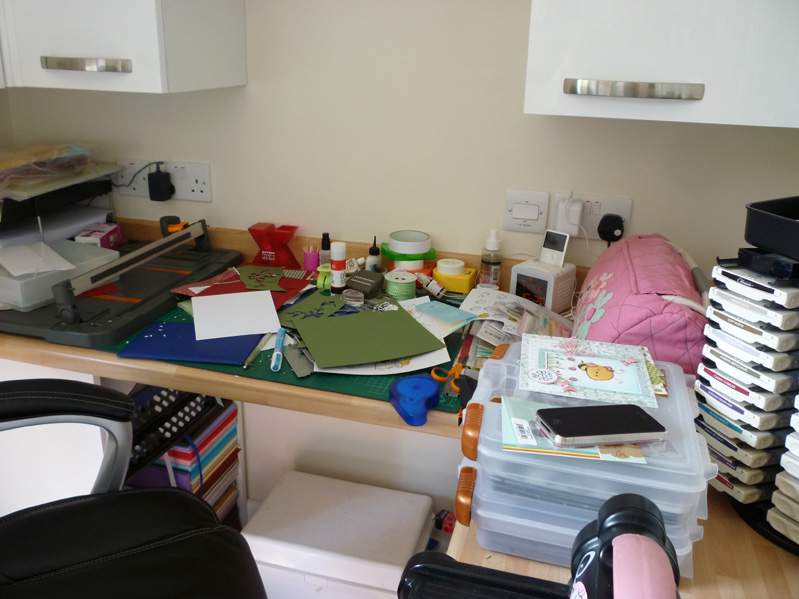 Another pic a bit closer to my messy desk although this was an improvement from the other day when I had several inkpads and stamps on my desk.

Must take some pics of changes to my room. You don't have much room to work do you and it does take a while to get everything where you want it and to remember where everything is too x

Thanks for the "insight" to the HQ of Debby!! xx

It may be small [to you] Debby...but it is all yours!!
And the gorgeousness that comes out of your space is always inspiring.

Your work space looks lovely and everything looks to be close at hand which is what you need when the creative flow starts. Thanks for sharing it with us. You've just given me the push to go and tidy mine up, lol.
Lorraine

Your desk looks so organised would hate for anyone to see mine.
Hugs
Margaret M

Your crafty space looks lovely Debby. I could really do with a comfy chair like yours.
Enjoy the rest of your week.
Hugs Sharon. x

Great to see you are well and truly settled in your new craft room Debby, you will soon remember where everything is....would drawing a plan of room and writing on the cupboards etc whats in them .... on the drawing of course and pin it up in front of you xxxx

A pretty tidy and neat desk I would say. Happy crafting . Francesca #48

Oooh, it looks lovely Debby. Everything nicely to hand is a huge help. You don't need a barn sized place to produce great stuff - tee, hee - and it helps to cut down on the hoarding :)

Oooo what a lovely new space and you are looking pretty organised there too, luv Sam x

Small but perfect! I love that you have so many cupboards right to hand!

This is a lovely work space Debby and the advantage of it being compact means you don't have to move about too much, and it is totally your space. I'm sure you will gradually begin to find things easier and the work you produce there is always gorgeous. x

Your new space is lovely Debby. It must be so nice to have everything close to hand, purge done and the balance organized. I need to do that too!

You will eventually remember where you put each item...it is just too new yet...time will imprint it on your memory!

Hi Debby, love your new space - those cupboards are so neat and tidy looking. I'm still looking for 'missing' stash months after moving here and still adjusting too. Hope you have a great week. Elizabeth x #45

Great organised space Debby,
I'm trying to settle into a new space too... in fact a new desk, room, house and country! ;D
Some of my stash is still in boxes so I'm impressed with your orderly work space.
That chair looks like a dentists chair but very comfy.
Enjoy desk hopping
Happy WOYWW
Neesie #62

I can empathise totally about putting things away and then wondering where!!!
Looks fab!
Chrissie

Ah I also need to have everything almost within reach... I put half the cupboard on the (dining)table before I begin crafting, and I've put lots of things in a stacked chest of drawers from Ikea (unfortunately they don't sell them anymore) with weels under it. Not that I wheel them around a lot.
So, do you have any plans for that very empty white wall?
Debbie/Daqa #52

Ha, your space is neat compared to mine! I don't think it matters how big or small our craft room is, its just always filled with happiness!

You'll get your space the way you exactly want it and sometimes a smaller space makes everything is so easy to reach :) hugs Nikki 5

I like those white cabinetts. Makes your workspace look very clean and tidy.
Cheers
Gabriele 29