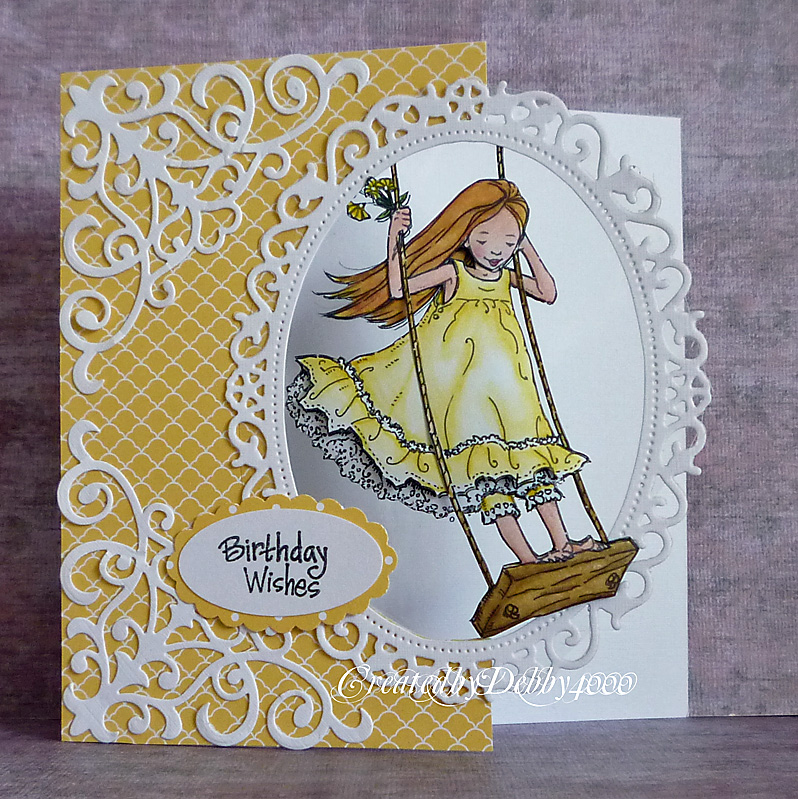 Today's card was a bit tricky to photo, especially has I wanted to show off the fact that I had stuck my image on acetate. It was an idea I had and I was pleased how it turned out although I was worried that my sticking fingers (I always seem to have glue somewhere on my fingers) would mark the acetate.
By the time I had attached the image and sorted out the Spellbinder floral oval frame I really couldn't work out how to decorate the card so I kept it simple. Just used the large Spellbinder flourish corner die and a Birthday sentiment and of course my image is Mo Manning called Daisy.
Well thats the large bank holiday and next week it September it all downhill to Christmas now and the weather has decided to turn into an early Autumn. One good thing its Simon Say Stamps Stamptember and I have some new goodies to play with only need the time to do so.

Stunning card Debby with a gorgeous image too. Love the way you've layered the image into acetate. So clever! Hugs, Wends x

Your cutting out always amazes me Debby!! This is a fantastic card, and the die cuts were a perfect touch xx

that was a very clever idea!

I agree how difficult it is to photograph acetate without lots of glare but but you managed this one perfectly. Love the fresh yellows and the lacy feel.

Fabulous card Debby she really looks like she swinging in the air,,,,,

Seems like this sweet girl is really swinging in the frame! So clever to stuck her on acetate.

Wow, Debby, this is just amazing. And I think there wouldn't be more decorations. It's just stunning the way it is. Hugs, Ankie

This is gorgeous Debby. I love the sweet image and such a wonderful design.
hugs Sue xx

Stunning card, love the idea, image and your colouring, fabulous;-))m

Stunning and beautiful! Love the idea of the acetate...brilliant! really makes her seem floating in the air!
Great design, Debby

What a fabulous idea to her swinging freely inside that beautiful oval Debby. I love this.
Lorraine

Another gorgeous card Debby. Like how you have used acetate.

Oh, this is soo beautiful Debby! I have problems with yellow, but hey...your card is a real eye-catcher!
Hugs,
Martina

Loved this card the minute it popped up then saw how you created it. Genius! It is fabulous Debby.

Just love your idea, Debby, and a perfect image and frame to show it off! It's been pinned.....

Gorgeous card, Debby! What a brilliant design! I love it!

What a beautiful card Debby, I love your design and the image is delightful, hugs Kate x

Wow Debby!! Such a beautiful design with the fussy cut!!! LOVE IT! :) HUGS

This is a gorgeous card Debby, such a fabulous design.
Pauline
x

So beautiful Debby. Gorgeous image and I love that yellow.
Hugs
Cathy
xxxx

I love this card Debby, and what a great idea to mount on to acetate, it really looks as though the girl is swinging out of the frame. Beautiful paper and die cuts too. x

Fantastic design Debby and love the image and colouring..fabulous.

Gorgeous card, love the yellow and the dies.

Awww this is so lovely, the image and the papers go so well together x

Oh goodness, what a beautiful card, so elegant! The die cuts you used are sensation and add to the beauty of the card!

Beautiful as always Debby - stunning image and gorgeous design.
Not even going to try to catch up with everything (and everyone) I've missed whilst on holiday - I would need another one if I did lol!!!
Hopefully back into the swing of things now.
Have a fab day.
Debs xx

A beautiful card Debby love the way you used the acetate! Susan x

Another fabulous card Debby. I love the design and the use of acetate. Gorgeous sunny colours too.
Lorraine x

love the image and a fabulous card tfs

Fantastic, gorgeous card Debby love that image and die cut frame I love the sunny colours you have used and the beautiful image, like that you have used acetate, I keep meaning to use some of mine but always forget.
hugs
lorraine x

Fantastic, gorgeous card Debby love that image and die cut frame I love the sunny colours you have used and the beautiful image, like that you have used acetate, I keep meaning to use some of mine but always forget.
hugs
lorraine x

Stunning card Debby love how you worked with the acetate, it looks if she is swinging outside.

This is gorgeous, Debby. What a great idea to mount on to acetate.

Stunning choice of design for showcasing Daisy! I LOVE this card! Hugs, Lesley