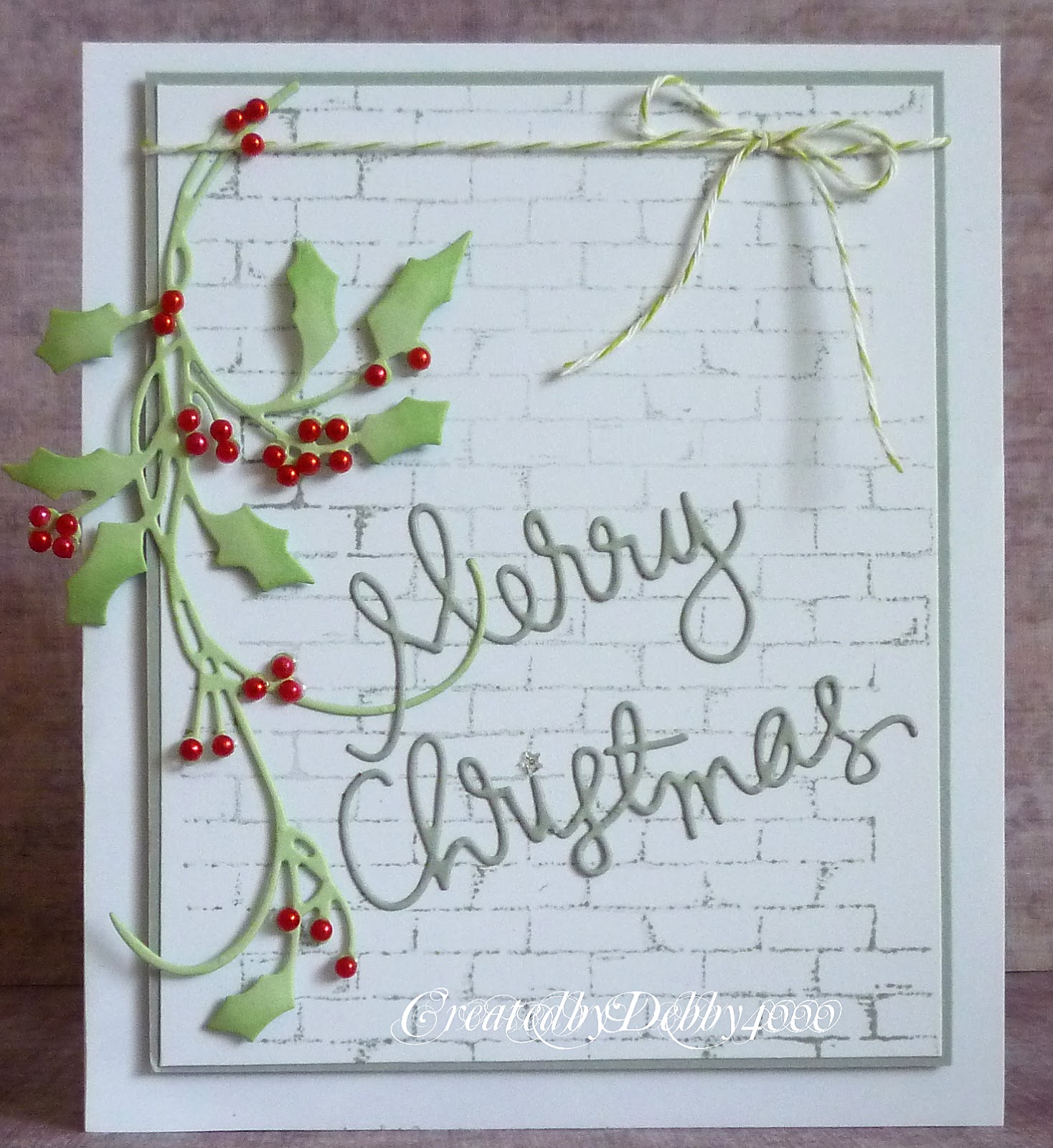 I bet your thought I didn't have a Penny Black card well up till yesterday you would have been right but when I came back from Swimming I had this idea.
I used the Penny Black Wall Cling stamp but I used the 2nd print of it so its faded into the background and I decided on using light green card for the Penny Black Holly die. Originally I was thinking of using white but when I had cut it out it didn't look right with the wall so I popped it in the box with the die to use another day.
Somewhere hidden upstairs are most of Christmas stamp especially some large wooden sentiment stamps that would've have worked a treat as I wanted a large sentiment so I settled on using the Simon Says Stamps Christmas Sentiment Die and added a tiny star gem for the top of the i.
How about this for a following on, Simon Says Stamp has a new release and in my honest opinion they've out done themselves this time. Its called This is The Life and I've already ordered some but there is still on my wish list.

What a fab bit of graffiti Debby, a really brilliant idea!! xx

This is gorgeous, lovely design and fab colours.xxx

Love this CAS card. The wall is such a brilliant idea na meks the holly pop. Have a great weekend. Hugs, Carol S.xx

Fabulous Debby...I love the brick wall and such a lovely holly die..the berries look wonderful too..

So elegant Debby. I ordered this die but it's still on back order, can't wait to play.

Have a great weekend
Hugs Shell

I love this Debby, great card and ideas x

I think I enjoy seeing Christmas cards more at this time of year than in December! Love this pretty holly, Debby!

This is lovely Debby, and that brick wall stamp works beautifully with the holly die. A nice uncluttered looking Christmas card. x

This is a fabulous Christmas card Debby, I love the stamped brick wall and your CAS design.
Pauline
x

This is an outstanding card, Debby! It seems simple at a glance, but you've added so many interesting details, like the tiny star, that it isn't really so simple after all.

oh wow this is fabulous debby.i love the trailing holly and gorgeous design and berries ;D

Oh I do love the wonderful simplicity of this design Debby, it looks awesome.
hugs
lorraine x

Hope it is not classed as Graffiti, gorgeous creation.

I love the new Simon release and over spent my budget and there are several more I'm hoping to get! Sweet card for Christmas, Love the holly and berries!

This is so lovely and so creative x

Great card Debby - I love the simplicity of the design.

Just wonderful Debby you get the most amazing ideas! Susan x

Beautiful Christmas card Debby!
The holly with the small beads is gorgeous against that wonderful wall!

What a super idea and it looks so effective - the die cut wording works a treat!
Hugs, Kat x

Hi Debby, this is a great idea for a Xmas card!
Hugs Lynsey x

Beautiful card Debby, love the holy berries, they are an eyecatcher

Oh I love your festive graffiti, your holly berries are fab!