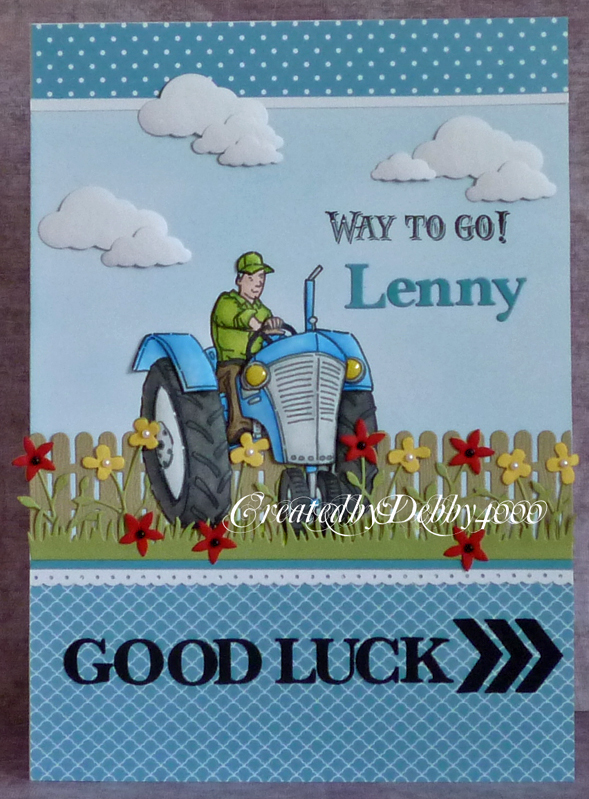 At last I can start showing cards that I've made for people but until they had been received they've had to stay in my draft post.
I knew it wasn't a good idea to make a retirement card for a work friend of Hubbys cos now I've had to do another for someone who is leaving. He is actually leaving because his wife earns more money than he does so he's staying home to look after his baby son.
He's leaving after 35 years working mainly as tractor driver and what better image to use than Mo's The Big Guy Tractor. Since his tractor was blue I obviously had to colour the cards tractor that colour too. Also he cuts large areas round the town using it which gave me the inspiration to place the PoppyStamps die of the flower border in front.
The Memory Box alphabet letters I used for the good luck and the Stampin up punch for chevrons.
The stamped sentiment on the outside and inside of the card are Penny Black. 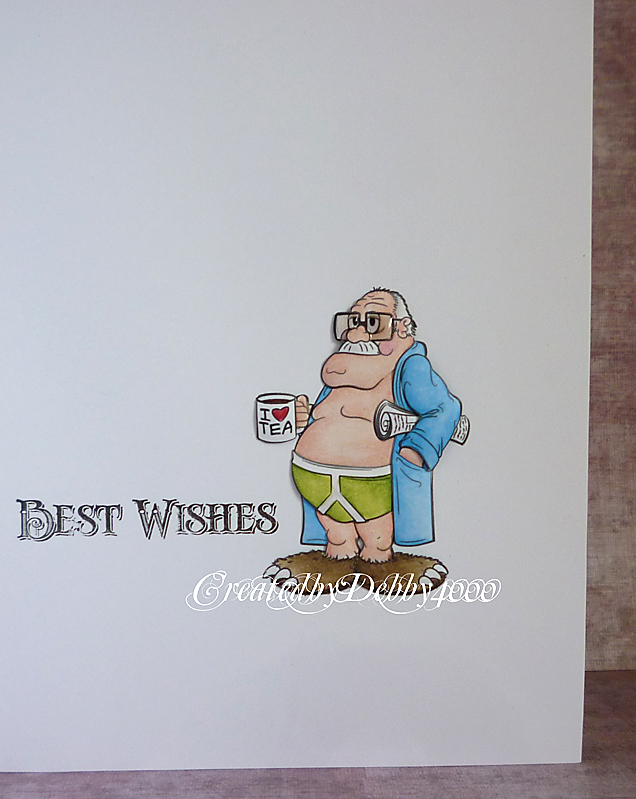 Because Lenny won't be getting up early to travel from Littlehampton to Guildford each morning that inspired me to use a Dr Digi Walter image. My Biggest problem with this card it had to be large. In fact its an A4 card that I had to make joining the two pieces of card together that took the time.

What a brilliant card Debby and I'm sure it was well received!! Love the image inside too...hilarious!! xx

Brilliant Debby! And your colouring is really fab too!

what a super card, he will love this, great images
Tilly

What can I say both so brilliant . janex

Wow Debbie this card is fabulous and the images perfect for the occasion.

Great card, Debby! How did you join the two A4 card pieces? Jo x

This is wonderful Debby. I both images and your detailing is fantastic.
This is really strange because I live in Littlehampton and my Son has a good friend whos Dad is called Lenny and he has just left to look after his younger brother. I wonder if it's the same person (his wife is called Mel)
hugs Sue

Brilliant Debby, sure it will be enjoyed...xx

A gorgeous card Debby and that tractor image is great. I love the colours and design, and even the inside has detail. I'm sure it will have been a real success! x

What a fabulous leaving card Debby, I'm sure when everyone sees this there will be more orders coming in. Love the images and layout.
Lorraine

What a fabulous card. Just love how you create scenes.

Love the card and a great image for the insert.

Two brilliant cards Debby. I love the scene you've created on the first and the cas design on the second.
Lorraine x

A fabulous card Debby, I love the tractor image and the wonderful scene you have created.
Pauline
x

I couldn't wait for Mo to release this image. I wanted to use it for my hubbys birthday but that didn't work out. Maybe next year. Fantastic card Debby. The inside image is hilarious. Hugs!

What a perfect card Debby ... I'm sure he will treasure it!
I've been asked to make a few cards for colleagues in work but couldn't figure out how to make an A4 card and stuck with A5 .. so I just put in several inserts in the inside so there was plenty of room for everyone to sign :)

Lucky man on two counts, gets to leave the workforce and gets an amazing card from you! Fabulous card!

An amazing card for your tractor driving friend, Debby! I can't help thinking it looks as though Lenny is actually driving THROUGH the sweet fence rather than in front of it. Love the floral border and the pretty clouds and Mr Digi on this inside is fabulous. Walter looks familiar to me and I feel I may have seen him around!!! Hugs, Lesley

What a fabulous leaving work card. So personalized for the recipient. Bet he just loved it!

The outside is so special with the tractor and the significance of it to him...but the inside made me giggle. A truly lovely and very fun card.

stunning card debby inside and out and i love the fabulous images :D