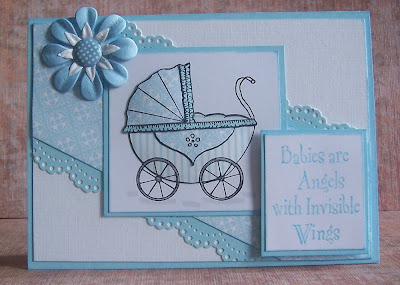 I apologise for crooked cards I've seem to over compensated and they are now leaning the other way but I promise my cards are straight! Well after spending the day moving paper around my desk or fighting with photoshop to make a watermark gave up in the end, I checked out the CPS challenge which I found very difficult, they want you to choose a sketch from all the sketches they've used that's only 99 of them. I'm Libra its very hard to make a decision like that. Eventually I choose CPS#8 it was helped that the DT had made baby boy cards for Tami which inspired the card. I paper pieced the pram and the sentiment is Hero Arts and the flower is made with stash from Poppicraft. 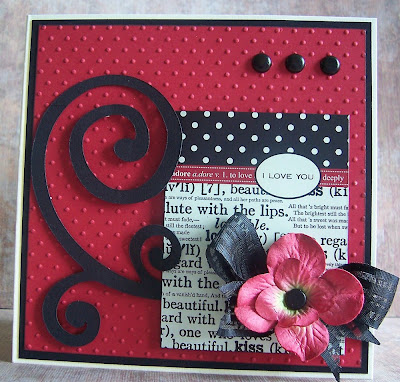 When I was hunting for inspiration for Kazan's sketch 18, I knew I wanted use this 7 Gypsies sticker but it was bit plain so a bit ribbon and fab prima flower worked a treat, but I was stuck with the side panel so having discovered a nice flourish on the Stretch your imagination cartridge for the Cricut, I thought it work up the side and then promptly cut the wrong one but I think it works better, afraid the brads had to go the other way then on the sketch. Oh and the card is square.

I've received this sophisticated award from Benedicte and you have to pass it on to 7 people. Again I'm running late this morning so will have to do it another day but if you haven't received it yet, well I'm sending it to you.
I couldn't lie to the Dentist about the very sensitive tooth but he found it, so that a filling and a lot less money on craft.
Today History is being made in the USA, Good Luck to the new President.

2 beautifull cards.
i love the border and sentinment on the baby card.
And I love the colours and embellishments on the second one.

Have a great day,
xoxo karin

delightful cards both are Debbie !

Indeed we will be watching on our telly here history being made !

Lovely cards Debby! Your baby boy card is just adorable!!
We will be watching the inauguration on the other side of the world here in Oz tonight!! What exciting & historic times!!!!! :)
Peace & love
Alison xx

Hi Debby
Love the gorgeous cards, I believe you can also enter it into the spoonfull of sugar challenge as baby cards are our theme this week, Hugs Debbie x

Congratulations on your award Debby, very well deserved it is too!
Your latest cards are just gorgeous, I'm loving all the elements you've used, and as a fellow Libran I know just what you mean about having to make decisions!

What super cards. I love the angle on your baby card w/the scalloped edge & your Vday card is simply elegant. Great job!!

Lol after reading your post about going to the dentist, one of my teeth at the front decided to break in half, so I now have a dentist's appointment on thursday. I'm scared stiff!!! I haven't been for about ? years.:0)

The colors are really fabulous. I love when you put flowers on too!
-Heidi

Both at FAB Debby!!! I love that you paper pieced the carriage!!! Sooo cute!

Lovely cards Debby, I especially love the sentiment on your baby card! xx

Great cards, both of them. I love the flourish. I have that cart too, but didn't realize it had that flourish. I'll certainly have to check it out. I love your choice of colors and how you altered the sticker. Great job!

2 very different but gorgeous cards. I love the delicate blues for a baby boy and the striking red and black makes for a fabulous valentine. hugs, annie x

Hello, debby
I have an award for you
hugs, Mumur

Debby these are fantastic!!! loving the valentine one very much with the gorgeous flourish :) x

beautiful cards, I love the baby carriage, how sweet!

Sorry about your costly trip to the dentist, that's the pits!!

Two fabulous cards again Debby. The colour combos on both cards are beautiful and I love the sweet sentiment on the baby card. Debbie x

Wow Debbie this is sooo cute. I love the embossing and the red & black. Thanks so much for playing
Hugs
Kazan

Just been looking around your blog and all your cards are amazing, i love the different style you have for each of your makes, they are all so well thought about and put together

Great cards!!!! Both are lovely!

For the watermark, visit my blog and one of the categories is digital tutorial or digitut. Somewhere there is a video tutorial on how to create a watermark. Should be easier after :)

That baby card is just amazing! What a clever idea to make it even more cute. LOVE what you did with that CPS sketch too.

2 gorgeous cards Debby, the blue baby card is so sweet and I love the black and red with the beautiful flower. have a good day

What a lovely card!
The colors are so pretty.

Fantastic cards and a lovely job on them both! ♥

These are beautiful cards!!
Martha

So beautiful!!! love your take on kazan's sketch!