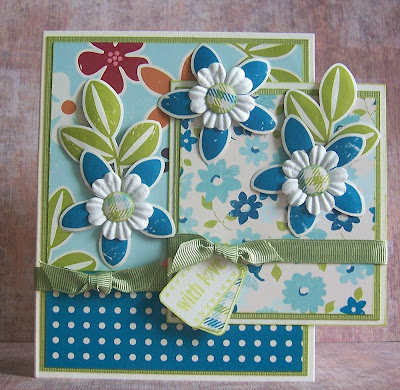 Unfortunately when I saw Laura's sketch on 2sketchers4 I didn't immediately get an idea which is what usually happens but that could be because I was still struggling to get back to normal when I first saw it. So I had these scraps of gorgeous October Afternoon on my desk and started to layer the card to sketch. I wish now I decided on 3 flowers instead of two because the third flower is a space that annoyed me when I thought I was finished. Not sure why I decided on two when I know that odd numbers tend to work better. 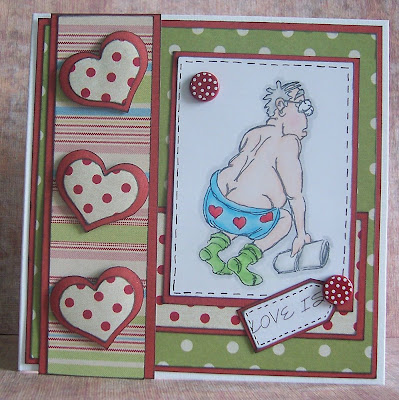 Now yesterday's card I had used a cute PB boy with a fun sentiment and I could have used him for Cute Card Thursday but this fella has been stamped since Ally Pally and not be used, he wasn't even coloured. So I've used him instead and made him into a Valentines card and the insert will say Wearing you're Wife's present. The stamp was an unmounted from a stall that was selling loads of them, the papers are old and I think are Making Memories but don't hold me to that. 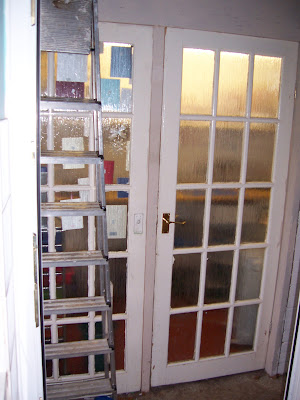 These pictures are for Carol who was intrigued that my Craftroom was in the outhouse which used to be the coal bunker and a shed, this is what you would see outside my back door. 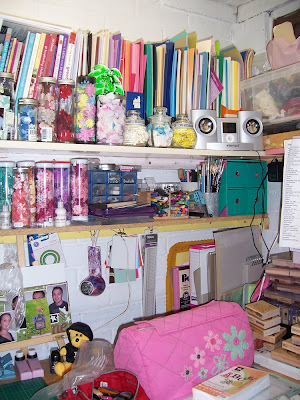 This is to the right of my room barely enough room for my Ipod speakers. 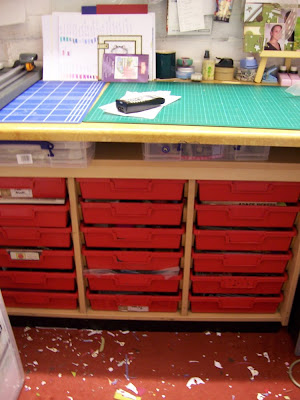 This is the new unit that hubby put in last year and to the left are shelves with boxes and a large plastic box that hold all my 12 by 12 but that photo is boring.
I also was asked whether I used primsacolours for colouring which I do, I've also got some polychromes and plan to get a few more. I do have some promarkers but I struggle with the tops so I've given up using them. Whoops sorry about the long post.

These cards are gorgeous, especially love the first one which is so clean and crisp. The second one had my smile lightning up. Love your craft space ... very organised. Have a great weekend. Hugs from Desire

Love the cards but the second one is fab lol my sense of humour. Fabulous piccis of your craft are scrummy goodies in there. Have a lovely weekend Debby.

firstly wonderful cards as always ~so beautifully coloured and made!
secondly your craftroom is so wonderful ~it maybe small but it is yours (all yours)!!! thanks for sharing the photos!!
vanessa xx

Hi Debby 2 great cards again love the first one and the papers are gorgeous. I also have some of these fun stamps yet to be inked may have to use them for the CCT challenge...love your valentine card such fun.It is so nice to see othere people's craft spaces love being nosy. Sue :o)

Two fantastic cards and just love the image on the second one!

OMG how much stash do you have! Lucky you, having your own room, I have to share my bedroom with mine!

fabulous cards Debby, I love that old man, he is a hoot! What a fab work space you have now!

Love the design of your first card Debby and gorgeous papers and flowers, Your second card is so funny and just love the character. It's so great seeing other peoples craft spaces.. I get so envious as I don't have one :-( Hugs, Nikki x

I LOVE your take on Laura's 2s4y sketch, that October Afternoon is perfect here!! Fabulous card!!

Both cards are really pretty, but i did laugh at the bottom one, lol hugs Pops x x x

Fab cards Debby, the sexy male card had me in stitches!! xx

Wow you have some gorgeous cards there dear. Love the first one it is gorgeous dear and the colors you used wow love them

Debby I just adore your work! This is fantastic!! Thanks for the little peek into your scrap room!
Laura

2 fabulous cards Debby, the man image is so funny. Have a good weekend

These cards are so cute!! That second one cracks me up! Great job with Laura's sketch this week!

wow what a stunning card for the sketch...I love those papers and wow what a scrummy delicious craft room...would love to come and have nosey
Hugs
kath
xxxxx

Fabulous craft room and lovely cards I particularly like your first one. Kim

I love the embellishments you created out of the October Afternoon paper!

Hi Debby,
the cards are fab as always and thanks so much for showing your craft room! it's dinky but perfectly formed :0) i love your cover for your Cricut machine:)

I have left you a little something on my blog!

Hi Debbie, thank you for visiting my blog and leaving a comment, I appreciate it. I have been looking through your blog, your cards are amazing. I'm off to add you to my favourite blog list and to follow your blog. Sue.x

Two fabulous cards Debby, Love beautiful papers and decoupaged flowers on the first one ad the fab funy image on the second one :)
Love your craft space...it looks so organised...not at all like mine! LOL
Have a great weekend. Debbie x

Wow! This is just stunning! Love those papers!

These cards are great hun love them both, I bought the Ethel & Murray stamps as well and I love them, Your craft room look so tidy, I am awating some storage for mine, supposed to come today
Hugs Jacui x PS have a great weekend hunx

Two brilliant cards but I especially love the CCT entry.

2 Fabulous cards, I really love the 1st one the colors are sooo beautiful and love all the layering, and the 2nd card made me laugh! And I love your craft space :)

Thanks for the comment! I love your card too! (: great work!

Your cards are gorgeous!!!! I love the first one the best. So so awesome!!!

These cards are both fab! Love the colors on your 2S4Y card!

Two stunning cards Debby, I really love the second one, the colours are papers are so pretty. Love your craft room, you're so organised

Love the colour combos you have used for the cards, really lovely and fresh. Your craft room looks gorgeous - I want one! ~x~

gorgeous cards Debby, I love how you get the dimension on your cards. And thanks for sharing your crafty space with us. hugs, annie x

There is visibly a bundle to identify about this. I suppose you made various good points in features also.