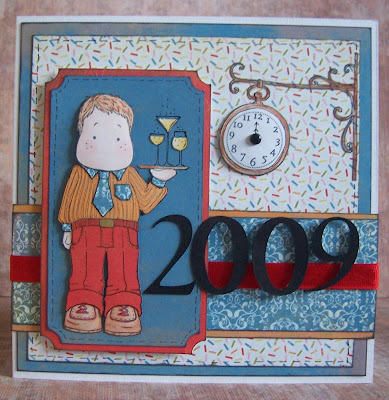 Before I get to my resolutions, first the card is for Everybody art challenge which was for a New Year card but it will also work for the Spoonful of Sugar Challenge as its still running. Somewhere in a safe space is the clock hands stamps and if you happen to know where please let me know, I had to settle with drawing them in and to start with I didn't like the colours I used on Edwin but it seem to come together when I put the 2009 which I cut from a cricut cartridge.

Now I hope you all are having a good 2009 so far, we had an amazing time and unfortunately I do believe there may still be evidence of this on my sisters's camera! I'm still at Sis's cursing her PC cos its really slow.

Now for the resolutions;

My first is to try out of a DT, I have been asked but worry that if my joints play up I won't be able to keep deadlines and don't wish to let anyone down. Now when I had flu I managed almost to still make a card, so I reckon if I get on one or maybe two I should be able to manage. I not bothered if I don't make one there is so much talent out there.

My second is to use Damon now if you don't know who Damon is he is actually my sewing machine but I've called him after a boy in Omen ( which seeing as some of the filming was done in the Cathedral of my town is a very apt name) I have problems with Damon running away with the stitching but again this is probably my fault because I don't feel the pedal with my bad foot so I going to practise using my left foot and hope I can sew straight!

Last one and more serious than the first two I must lose weight because it creeping up instead of creeping down.

Just want to wish all our Friends in Tossa de Mar well, they had an awful storm on boxing day the worst one since 1950 and there has been a lot of damage, thankfully no lives were lost in Tossa.

Hi Debby, love the card, the colour of edwin works beautifully with the papers. you always make beautiful cards.
good for you with your new years resolutions. I don't make any as i know that i won't keep them! I expect that they will be fighting over you to be on a dt in no time. and last of all i hope that you get to master Damon with your left foot..
big hugs Rachxxx

Happy New Year Debby, I'm so glad your having a fab time at your sis's. Glad to here your going for a DT as you know how i feel about your stunning creations just love them Mrs. Have a fab day!

Hi Debby,
your card is very cute and I really like the used papers.
Thanks for joining in our challenge and a very happy new year.

Debby, I decided not to make resolutions this years, but instead, in my diary, I listed "hopes" for 2009.

I can certainly relate to the weight issue. I am overweight and have been for quite some time. In October my hubby gave me a necklace that says "You're special". It was no occasion so I asked what it was for and he told me that I tend to forget how special I am. That was my AHA moment. I joined Jenny Craig that day because I deserve to be healthy. I've lost 33 1/2 pds so far and have a long way to go, but I'm doing it! I wish you love and encouragement on your journey.

Your card is adorable! The clock hands are in my drawer marked Home Contents. LOL You did a great job. I couldn't draw a straight line if my life depended on it!

Love your new years resolutions! :O)
Love your card too. It's so perfect for new years.

Oh hon this is just gorgeous I so love the way you put it together dear.
I am right along with you on the weight thing dear. Have already went to DR which sent me to dietitian and am now on a very starving diet lol Makes me want to start smoking again lol

Great card as always Debby, love the image and your colouring is fab.
I have an award for you on my blog. Debbie x

Thanks for joining in the EAC.

Gorgeous card...and wonderful colouring. I'm sure you will be snapped up as a DT member...good luck!
Carole :-)

Your card is gorgeous Debby...
Best wishes for a Happy and Healthy New Year....:)~X~

Hi Debby - thanks for playing eac - I love the way you lift your rubberstamps an the card.
Happy new year to you!
hugs
mamapia
EAC-Team

Happy New Year Debby :o)
Your card is just so gorgeous. Love it! Thanks for joining in our challenge.
Hugs
Moni
EAC-Team