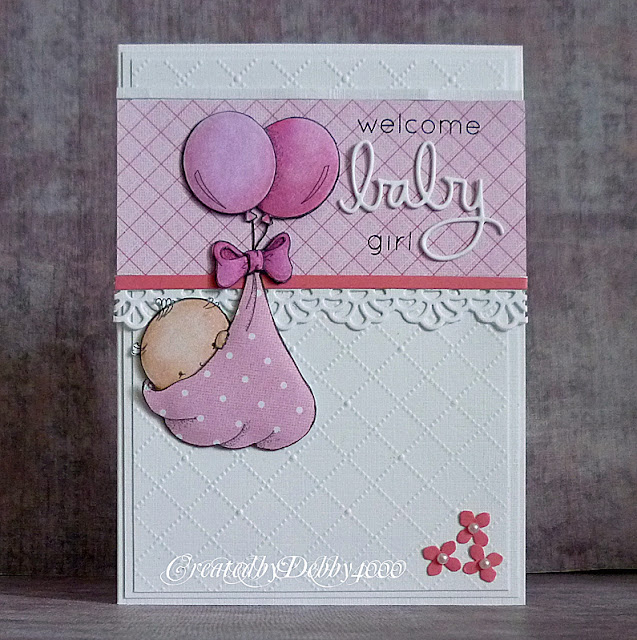 This was the card I planned for yesterday but you see the little hand it was missing and you could see where I layered so it had to be done.
My little baby is from Di's Digis and the sketch is this week Sweet Sketch Sunday. For a change I've embossed my background. Added pink patterned paper strip with a pretty border from MFT.
I paper pieced the baby's blanket to bring in a bit more pattern and to finish I added the tiny flowers from the Hydrangea punch.
My sentiment was using the baby die from Simon Says stamp along with the baby sentiment as well. Of course the die was using a couple times to give it more dimension.
I must try to remember to schedule my post the night before since Mr PC doesn't like working when its first turned on. Never thought this post would take nearly half an hour to write.
Today its 70 years ago we celebrated VE day, I remember asking my Dad where he was at that time. Apparently he was on a ship on his way home from Italy and debarking at Liverpool so the poor chap missed the celebrations.

This is a such asweet image Debby and using really pretty papers and all finished perfectly with the lovely little flowers and die cut sentiment. x

Such a cute card Debby love it, hope you are keeping well
have a great weekend
Shaz xx

A Gorgeous card Debby, i love your sweet baby xx

Oh that is gorgeous Debby! Such a sweet image, and the colour is so pretty.
I pretty much schedule all my posts. Mostly because I am either not awake yet, or busy running around getting kids ready for school when my posts are due to go live, lol. x

So cute and dainty. I always schedule my posts, usually several at a time as I only get the iPad out in the mornings

This is such an adorable pretty creation Debby. Love your your decoupage and paper piecing. Awesome.
Hugs
Cathy
xxxxx

so gorgeous debby.i love the sweet baby image and your pink colours and embossing are stunning ;D

Eye catching beautiful card, Debby great work, thanks so much for your inspiration.
Shaz in Oz,x

Beautirful baby card, Debby. That embossed background is so pretty.

This is so pretty Debby, love the paper pieced blanket xx

It doesn't get any sweeter or cuter than this card! "awesome"

Simply everything a baby card should be... And more, Jo x

Oh this is so lovely.

A beautiful baby card and love the design. Have a lovely weekend. Hugs, Carol S.xx

So sweet, Debby. This card is perfect to welcome a baby girl. Thanks for the story about your dad on VE day. How wonderful and brave of him to serve during the war.

Oh what an adorable card, Debby!

Oh my, how adorable is this!! Gorgeous cas baby card Debby - I love it!
Hugs, Danielle x

Gorgeous and so adorable.
Deborah A

Very pretty and such a sweet image.

You have such a great eye for design, Debby. This card is perfect! Hugs, Lesley