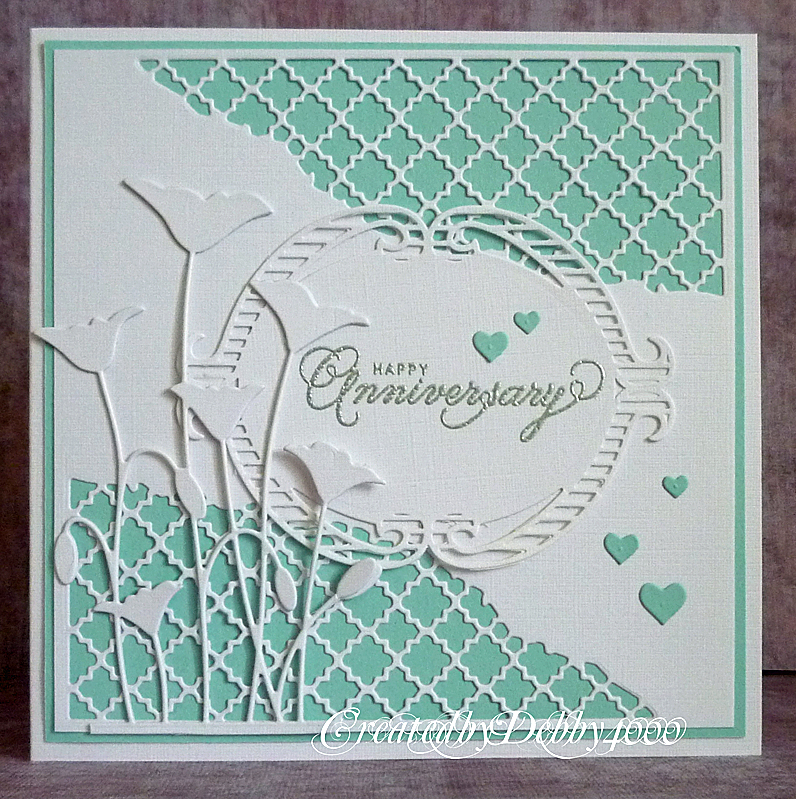 I had to make an Anniversary card but my poor craft brain was struggling so I grabbed the new Memory Box Distressed Windham Collage die  and the Row of Poppies.
It just so happened the Perfect Love stamp set from Simon Says Stamps was in the pile of must put away stuff on my desk so I used the anniversary one from the set. It just need a die for it to sit in and I chose the smaller die from the Fleur de Elegance.
To finish I used some Simon Says Stamp Holiday Shapes hearts to stop my heart racing when I see all that white space!
We wanted to have a look at some Powerchairs and I found a shop in Copthorne near Gatwick so we've popped over there to have a look it just so happened that Crafts U Love was on the way home well it was on my navigators map! A few items and thats £50 gone.
Posted by debby4000 at 7:00 AM

Great use of dies Debby. And lucky you into Crafts U Love, often but from them on line.

what a great die set Debby. Love the blue under the die cuts.

This is gorgeous Debby, I love the elegant design and beautiful colours.
hugs Sue xx

Beautiful, elegant card Debby love the dies you have used and the colours it looks so soft and delicate
hugs
lorraine x

A beautiful card Debby, such an elegant design and lovely colours.
Pauline
x

So beautiful Debby - the colour is gorgeous.
Have a wonderful day.
Debs xx

Fabulous card. I love the colours and the design. Just stunning! xx

Morning Debby another beautiful card I love the soft colours and your design is wonderful.
Debs xx
{Debs Cards}

This is so pretty Debby and the MB die is beautiful together with the lovely SB sentiment label and the sweet little hearts, and adore the colour too. x

Beautiful card. Love the colors and the diecutting.

Beautiful and elegant card Debby! I now have a better idea what the effect of the collage die is.
Liselot

So elegant and beautiful Debby..beautiful.

so stunning debby.gorgeous colours and sentiment and i love the lattice :D

Stunning card Debby with all your lovely die cuts! Love the white and turquoise together!

I know Copthorne, as I lived there for 20 years! It's about 3 minutes from where I live now!! I am thinking you are one of the queens of die cut cards. This is stunning. hugs, Carol S.xx

This is stunning. Love the white and mint green, the die cuts and the slightly disguised white space LOL. Hugz

I love that cool refreshing aqua color. It's so striking with the white. Beautiful. Hugs!

Beautiful! Love that aqua with white,

Lovely card. I really like the die you used for your sentiment label. I hadn't seen that one before. Very pretty, and perfect for the space!

Gorgeous card, Debby! Love how you used all those dies!

Sigh, more dies I simply MUST have... you are so naughty Debby showing me such gorgeousness :-)) Really love the aqua, so serene and elegant, perfect! Donna xx