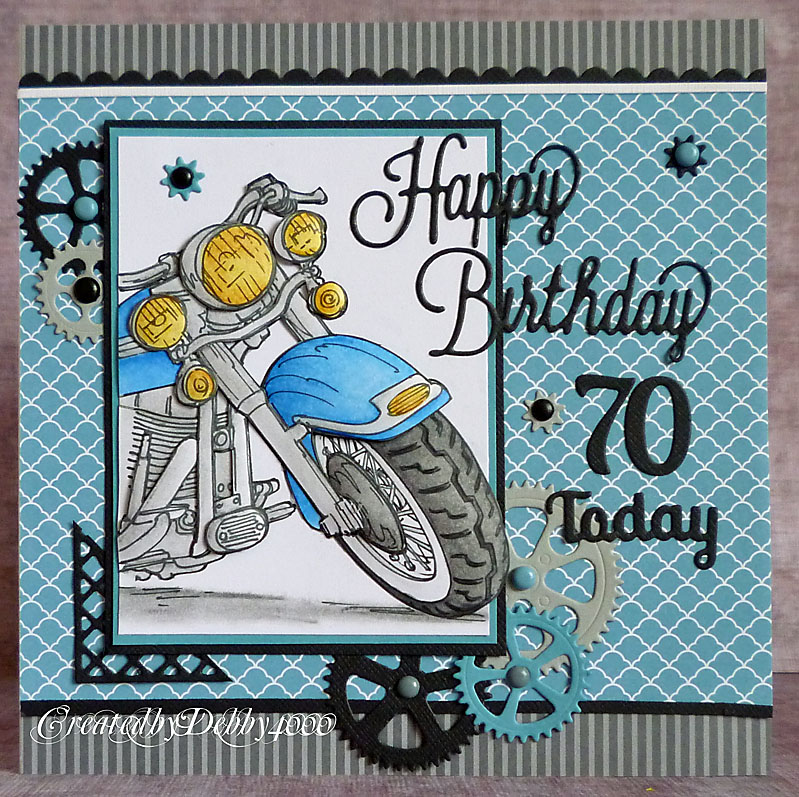 I don't make commission cards but occasionally someone catches me at a weak moment. The card is for Motorcyclist fan and first I had to find an image. Finally I found the image from Just Inklined called Born to be Wild.
Took some working out how to colour it and then work out what bits I wanted to layer, its not like person with arms and legs. Too be honest that was the easy part than I had to make a mans card with it.
I so pleased Nikki made me buy these cog dies perfect size for a card, also I cut down the Joy coner to make the corner.
Penny Black Birthday die and the numbers and the today came from the same place as the cogs they have All Occasion Dies on the packet and I brought them at a Craft Show. It didn't help when I handed the card over I had put the wrong age on. Luckily the seven came off and when I cut the letters I cut the all of them rather than having tiny dies to lose but I keep them in the packet with the dies so there was an 8 already cut. 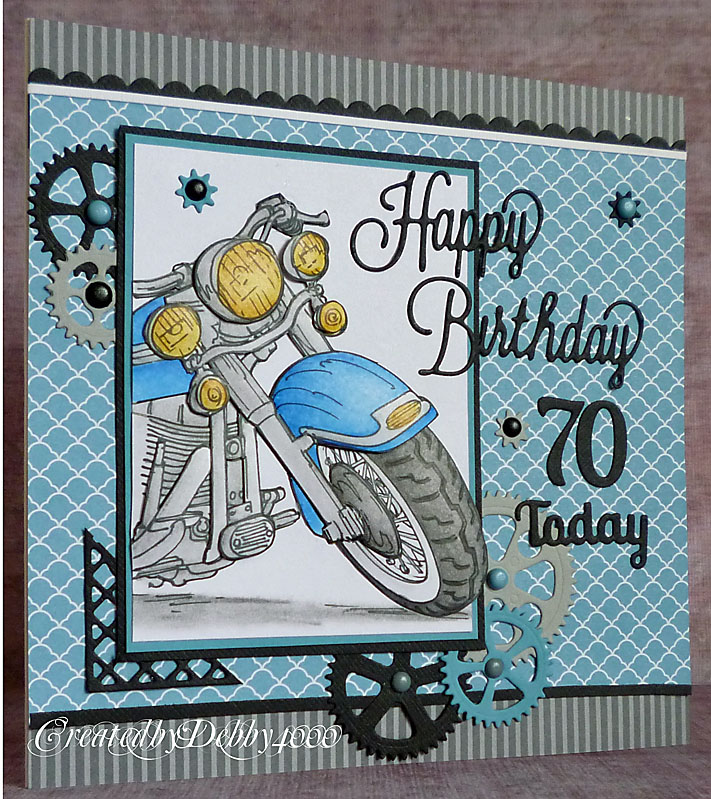 Had a bit of play with the envelope making punch and made a box for it too and added some left over cogs on the top. The lady was really pleased with it and now someone else plans to ask for a special card for an occasion coming soon. It such a worry making cards for other people because you never sure they going to like it and I know how long it takes to colour, layer, move paper and embellishments around, sticking it down.

Wowser I think this is the Number one Masculine card ever made......love it

Fantastic card Debby am sure it will be loved and treasured. I don't like doing cards to order either - too much pressure x Susan x

I can think of a few boys who would love this (minus the 70) hun! Great job! Hugs xx

fab, great image and it works well with all the coggs. Hugs Juls

This is fantastic! Great Inspiration coming through from you for the really hard Male Cards and they are all AWESOME!

Fab male card, love that image. I bought an All Occasion bird die at a show, really pleased with it and good price too.

This is wonderful Debby. I love the image, fabulous colouring and brilliant detailing too.
hugs Sue xx

Fab card Debby. I'm glad it's not just me who worries about whether people will like what they've asked for. It really does mess with your creativity - much easier if you can just go with the flow. Had to laugh at the wrong number. Oh dear!
Love Lea x

I really really like this one!! Great masculine card with that image and I love all the cogs and blue color!

This is awesome Debby!! xx

This is a fabulous card Debby, brilliant image and embellishments.
Pauline
x

This is such a great masculine card Debby. The colours are lovely as are all the extra touches with the cogs and border and corners. I have someone to send a card to who loves bikes so must go look at Just Inklined. x

Absolutely love this card. I do wish that Happy Birthday die was available in Australia. It's fabulous. Great image and as usual, the colouring is superb.

Your card is amazing Debby, you've made that motorbike look like it is about to ride right out of the card. A brilliant job, you shouldn't worry, your cards are always spot onn but I can see where you are coming from ref all the work that goes in to making them

You shouldn't do such a great job on a commission card ... now you will probably be getting tons of phone calls from people wanting you to create cards for them. This is a PERFECT guy card ... the image, colours, cogs, paper ... you are the master Debby!

You found a perfect image and what a terrific card you've made with it. Popped in all the right places. Hugs, Kathy

Wow! This is so GREAT. Hugs, Ankie

I think you did a superb job! Any guy would like this card.

You have done a fantastic job! Masculine cards are so hard to do...but this one is awesome!

Know where you are coming from about commissioned cards, I spend most of my time worrying about whether I have interpreted their brief properly. This is a fantastic card though Debby and I'm sure the recipient is going to be thrilled with it.
Lorraine

Well you have done a great job on this commission Debby. Hugs, Claire x

WOW! what a fantastic card Debby, the image is brilliant and the embellishments are just perfect. Love your choice of colours and papers, hugs Kate x

What a fabulous card for a fellow! Especially a motorcycle enthusiast!

The image is wonderful and your colouring is spot on as always!

This is fabulous Debby, you can turn your mind to anything.

Brilliant male card, love the image and how you have presented it, great ppaers too.

Wow Debby this is a fantastic card! You have done a great job decoupaging the bike and the cogs go so perfectly! I might have to buy that image for my dad for Father's day it would be just perfect.
Thanks for sharing such lovely inspiration!
Hugs Lynsey x

Hi Debby, I have just come to your page from lili of the valley. Your cards are beautiful.

I don't think you need to worry about making cards for others Debby...what's not to like? It's AMAZING!!
The motorcycle image is fab, and the cogs are a perfect embellishment.
Awesome!

Now that is a handsome card! Perfect!

Wonderful card! I bet that 80-year-old loves it!

Your card is fabolous.
Hugs
Melodie

FANtastic Debby...superb image and colouring and love the cogs and neat corners..AWESOME.

Such a brilliant card, Debby, love the cogs and LO!

Brilliant card - especially for a 70 year old biker. MY 75 year old DH still remembers his glory days and can't pass a Harley Davidson without getting a certain gleam in his eyes so that topper would make a perfect car for him too :) Elizabeth xx

stunning male card debby.the image is fantastic and i love your cogs and design :D

What a brilliant masculine card, I'm sure your friend loved it!
I hate making cards to order too, it's so stressful!

Yes, I do some commissioned cards and I always worry if they will go down well or not - so far no problems!
And I can see why the lady was pleased with this; it's really stylish, fab colours and design and a great masculine feel to it.
In fact, I have this image earmarked for my father-in-law's next birthday so am loving the inspiration from this card :-)
Big hugs, Kat x