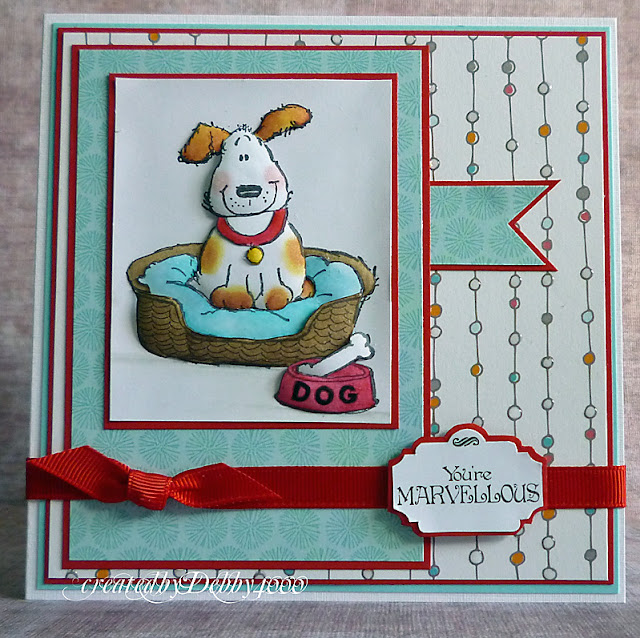 Today is the 1st of June and fingers crossed the Sun is shining long may it continue but its also the first Saturday of the month and that means a new challenge on Penny Black Saturday Challenge.
Some foolish person suggested since she needed loads of mens cards in June and Mens challenge and it was accepted. Not to worry I thought I'm seem to being on a bit of run with mens cards shouldn't be a problem.
I think my run might be finished.
The good thing is a managed to use this stamp, I've had it quite a while and a couple of other dog stamps that I brought second hand. There is a bit of error  but will work it out next time.
I've used American Crafts My Girl pack and the sketch is Papertake Weekly but I added a fishtail banner cos I didn't like all that spare space. I also used my glossy accent on the white dots you can't see but it is effected in real life. I used a sentiment which could be used for Father's Day or Birthday. Then I was stuck I couldn't for the life of me work out what else I could put on there. So I've left it CAS and my PB doggy isn't floating there is a bit of grey underneath his basket.
So its time to find those PB stamps you know you have them and make a Man's card, need a bit of inspiration pop over to the team.
Me I'm off to the Craft Barn Extraganza, it shall be an exhausting day but worth it in the end.

aaaaaw , I have this stamp, you've made him look so cute, super card Debby.
janex

Love your card Debby
my dog sits like this when he knows I'm going out waiting for his chocolate :)
jacqui x

Adorable image and fab card. Have a lovely day at the Craft Barn.
Beryl xx

Gorgeous card Debby. I love the image and design.
Have a lovely weekend
Lorraine x

Gorgeous card Debby and such a cute dog
Louise xx

This is adorable, I love that little chappie. Have a good time Debby.

This is a fabulous card Debby, I love your gorgeous image and lovely colour combination.
Pauline
x

What an adorable card and image Debby. Enjoy your tiring day. Lol!!!

So gorgeous Debby and adorable is your card x

Fantastic card my dearest friend^_^
I like the image ^_^
All gorgeous^_^
Hugs,
Sonia

Oh what a sweetie and not a PB i have, i'll have to look out for him, great layout and papers, have a good time at The Craft Barn, i've booked to do a class there, at the end of July, Luv Sam x

Awhh! What a cutie Debby...It really is GORgeous! LOve your colours.
Chrissyxx

awwwww what a sweetie
hugs

Fabulous card Debby. I love that image, wonderful colouring and gorgeous papers.
I hope you have had a good day
hugs Sue xx

so gorgeous debby.fab design and papers and the image is so sweet ;D

what a great and gorgeous card. Love this image. Regards, Helen

Have a nice (creative) week ☺
Hugs and greetzz Erica
heidebloempjuh.blogspot.nl