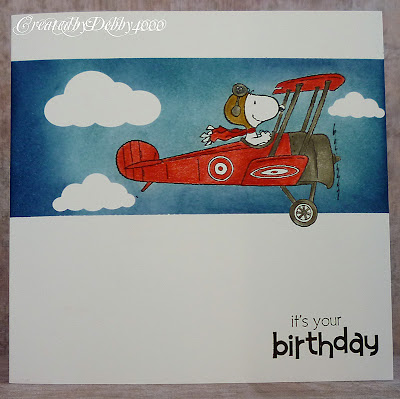 Not my favourite week at Less is More challenge, its One Layer week and the theme is Wings. It was while I was reading what types of wings on the challenge I had one of those lightbulb moments really wished I found the switch to turn it off.
The first attempt landed in the bin, but the end result was pretty much how I thought it would be although the blue is a bit darker mainly because I'm a bit heavy handed.
So I first made the masks, the clouds were actually cut with a die so no stamping was required for them. Once the image was stamped and masked, along with the clouds and I had to masked the strip I wanted then it was a case of blending inks over the masks.
I coloured snoopy in with Polychromos pencils, I probably went over twice with them so that I didn't need to use solvent and paper stumps cos I was sure that would have messed it up.
So I was pleased how it turned out but realised it needed a sentiment that was a scary moment, one slip of the hand and the card would have been messed up but for once it stamped beautifully and job was done.

Brilliant Debby, I do love these Snoopy stamps don't have any but wish I did!! Love the way you have done the strip of sky and clouds around him! x

This is just gorgeous Debby,love the image and fab colours.xxx

Love that Snoopy stamp - reminds me of my childhood reading the cartoon strip on the back of the newspaper. Do they still do that ? A great card and well done for stamping the sentiment direct to card. Something I always mess up.
Beryl xx

Love it Debby!! Fab for a Snoopy fan too.... and I know what you mean about the sentiment... one slip and that's your whole creation in the bin!! LOL! So well done on getting it perfect!

Awwww, it's so lovely to see Snoopy again!! Your card is fabulous!!

What a gorgeous, perfect card!!!!! I love how you coloured him. A truly marvelous CAS. Hugs, Brigitte

I love this image and love this card, even though I don't do LIM.

this image takes me back to my youth - fab card xx

I love that cute lil image,and as always it's a brilliant card.xx

He is fantastic....I {heart} Snoopy. Love this

I love your take on "wings"!! And I always flash back to my childhood when I see Snoopy...ahh...

Fantastic card Debby, gotta love Snoopy and fab to see him on a card :) Donna ♥ x

A great and funny card!

Great lay out!! That's always a scary moment for me too, stamping the sentiment, it looks great! Enjoy your evening, Colinda

love this debby.snoopy is brilliant :D

This is brilliant, just love the image.

HA! Love Snoopy! What a great card Debby. :-) Thanks for the wonderful memories. Hugs!

Awesome card! Snoopy was one of my favorites as a kid.
Hugs, Carissa

Aaah Snoopy my first love, i love it, it's great, LUv Sam x

Debby...this card is awesome! I LOVE that Snoopy image and I have several little grandsons that would LOVE this card!!! Super job with the sponging and coloring!!

What fun Debby, this is fab!
Thanks so much
Chrissie
"Less is More"

It appears that I am approximately 15 cards behind! Streuth!!! So I can't catch up and I'm just going to pick three of my faves to comment on. This is the first! It's a brilliant one layer card. It's beautifully coloured and I LOVE the image - very clever "wings" choice, Debby! Hugs, Lesley