I'm back, thanks everyone for commenting on my posts while I've been away, its going to be a while till I catch up.

My holiday started off calm and relaxing, last weekend is the Sardina Festival in Tossa de Mar, it starts off with hot rum and songs of the sea on the beach on Saturday and sardines and tomato bread on the beach too and free to all.

Now BIL very rarely lets people stay in his apartment on this weekend but because they were on the cruise a week early he said we could go. So when someone on Saturday shouted at me across the street and sounded just like KC and when I turned he was the spitting image of KC, it was only when my Sis popped up from behind the corner that I was certain it was them. Apparently he told Sis to pack a case on Friday night because they were leaving at 4am to catch the flight.

Then while waiting for Tapas at a bar on the front I looked through the garden to the hotel and my jaw just hit the floor my Sis still thought I was shocked from them turning up, little did she know that her son and his wife with her daughter and Sis's grandson had done the exact same thing to surprise her. So my calm relaxing holiday became very busy and spent so much time laughing, drinking and eating I now need a holiday to get over it.

I have to thank my DD for these amazing photos of my nephew who is truly a cheeky chappie who has only given his parents a couple of hours sleep since they've been there. 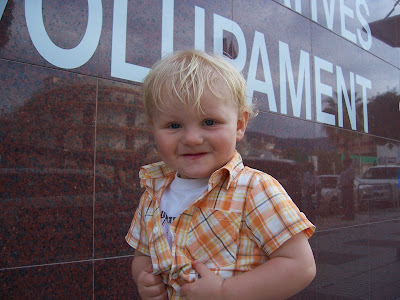 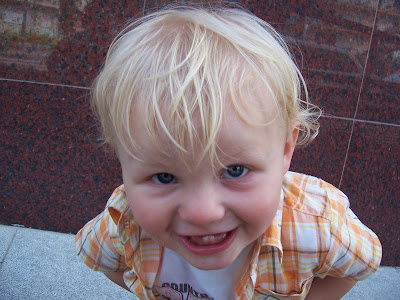 Your nephew is really cute..I love the naughty grin on his face..an angelic little devil..

Aw what a little angel ;0)
Sounds like you had a great time.

Aww what a cheeky chappie. Sounds like you all had a fab time. x

Glad you had a good time. What a cutie he is

sounds like you had a fabulous time! and that is one cheeky chappie you have there!

Hey, you used to write wonderful, but the last few posts have been kinda boring… I miss your super writings. Past few posts are just a little out of track! come on!.