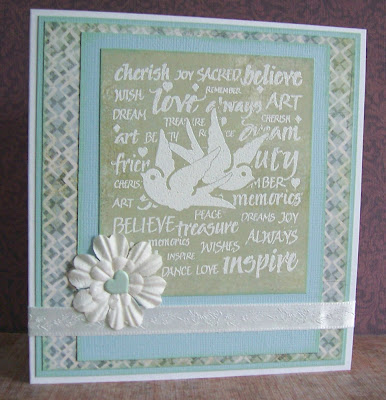 Hopefully Jan has received her acceptance card and won't have a surpise when she reads my blog. I've used the CPS sketch 68 as a starting point then it went its own way, the word stamp is crafty indivduals or at least I think thats what its called because I've popped into my craft room and I can't find it and it was from the Craft Barn. The birds are pink paislee, I don't think it was that expensive but I can see it being very handy. The papers are BG the one with dinosaurs in, the ribbon is from Hobbyart. 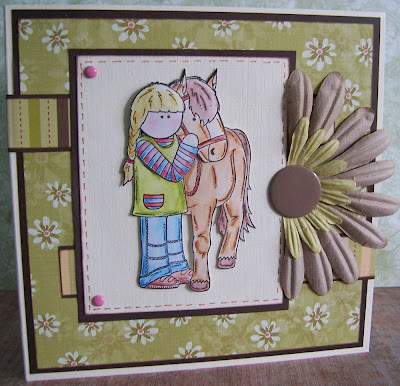 Now on a Spoonful Full of Sugar they have a recipe 3 brads or buttons, 2 patterned papers and a flower, Ok so there was a bit of cheating with the flower but I reckon two halfs make one whole one. I've used inktense pencils, it was really hard being so used to my small tin, the first thing I found out there's no peach for the face and I seem to be a bit short on browns but I love how the colour really spreads out.

It's Ok found that stamp.

Gorgeous card I love the big bloom you have used,Thanks for playing along this week :)

Gorgeous cards, your colouring of Nellie is fabulous, great pencils!! Your flower is fine, it is still classed as one flower no matter how many layers! Love it! thanks for joining in the challenge!

Both cards are just beautiful Debby. I love what you have done with the flower on the challenge card. Thanks for joining in. Hugs, Nikki x

Your cards are great! I love the soft hues on the CPS card. Thanks for playing along this week again with us!!

Beautiful cards Debby, I love the colour combo on the first one and he 2nd one is gorgeous, I love how you have coloured the image

gorgeous cards, love the flower and the papers on the 2nd one and the colours on the first one look beautiful very elegant

two lovely cards - the top one is beautiful and would be great for anniversaries (I have two coming up) and the second card is so cute! Interesting to see what you say about the Inktense pencils, I love them but you need a very watered down red to get a pinky flesh tone!

These are fabulous, I especially like the horse one!! Sooo cute, great colors, coloring and LO!! You make me wish I bought this when I placed my order yesterday!!

both brilliant, especially your '2 halves = whole' flower one! x

This is just fab.
Kes
x

Your card is fabulous Debby!! I love the 2 half's of the flower, and your coloring is just great!! Thanks for joining our challenge!

Great cards!! Love them both!! Thanks for joining our challenge!

Both cards are so adorable!! Thanks for playing at CPS this week!

Beautiful card, love the flower and layout. thanks for playing.
Joanne x

These are wonderful! I like the layout on your Sugar Nellie card

In the grand scheme of things you get an A+ for effort. Where you lost me was in the details. As they say, details make or break the argument.. And it could not be more true here. Having said that, let me tell you precisely what did work. Your writing can be extremely persuasive and that is probably why I am taking the effort to comment. I do not make it a regular habit of doing that. Second, although I can see the jumps in logic you make, I am not sure of how you seem to connect the points which make the conclusion. For now I shall subscribe to your point but hope in the future you connect the dots better.