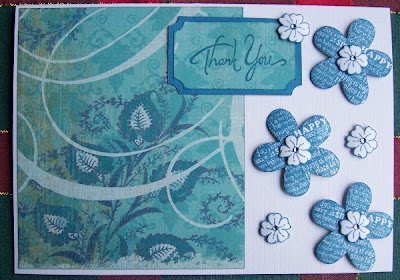 Nicola at My Paper World blog has designed her first sketch and while I was waiting for the glue to dry on some chipboard for my A-Z journal, I used it for this card. Stampin up stamps and I think the little ones are a docrafts, with papermania gems to finish it off. Not sure who makes the paper.
Thanks for the comments for the card yesterday, you're right, it just needs a sentiment. Can't believe I didn't think of it, obviously early morning card making doesn't work for me.
Well I've made my DCM card just waiting for enough daylight to take a pic and should soon finish the covers for my journal.
Went to Sis the other day managed to stop off at the Art of the Craft, she wanted to go to NEXT to exchange a clock because the face was cracked, I told her she was bonkers and made sure I had a book to read while waiting for the queue to get in the car park. So she saw the queue and decided against (isn't it great when you can say "I told you so") I pointed out that I hadn't been to a craft shop since December 14 and she replied that they could be shut. I then gave her a list of craft shops open because I checked online their christmas opening times, Ok most were a bit out of the way but Art of the Craft was just up the road so we popped in and I managed to get an album for MIL and I have already printed some pic ready to be scrapped. They also had a brand new stand with loads of ribbon at various prices of course none of the ones I chose were the cheapest, typical.
Posted by debby4000 at 9:41 AM

Love your card Debby and I love your Disney tree - my little sis has one too - soo cute!!!
naomi

I LOVE your card! The flowers and that paper are beautiful!
Thanks so much for doing my sketch!

lovely card Debby - i love seeing what you've done with that one set ... makes me consider pulling it out and having a play. Leonie

Wow! That is gorgeous!

OMG! this is GORGEOUS! what a beautiful card and a fantastic take on the sketch!

super card! we would love to have your talent at www.theshakerbox.com