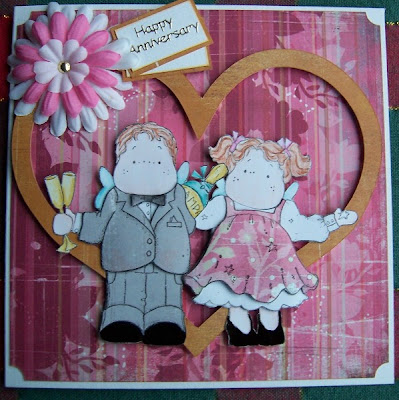 It's now official my brain is normal. Now I know that my family and friends will beg to differ but I have it in black and white that it is indeed normal, whoa that's a relief. So my lost of hearing and tinnitus is due to a damage cochlear far better than what it could've of been.
Now onto crafting, here's my party magnolia's used BG Phoebe I think, lots of cutting out, the idea for the heart came from here they had used a circle and some gems but I was pleased with just the heart instead. I made the Anniversary labels because this will be ideal for my Mum and Dad's anniversary in February, you can't say I'm not organised.
Posted by debby4000 at 10:06 AM

What a fab image! Love Magnolia stamps! So pretty, great colour, beautiful card!! Your mum and dad will be impressed and very glad!