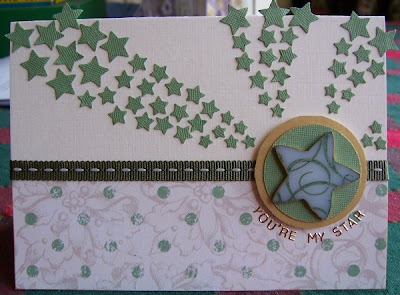 Di Hickman is on the look out for cardmakers to design for her sketches and has posted a new sketch. Now I would love to have a go for this but is wouldn't be fair to make such a commitment when I can't guarantee that my health would allow to stick to deadlines, but that doesn't mean I can't have a go with the sketch. Shrink plastic star, stamped with brilliance ivy and I got out my krylon gold pen and inked the edges ( thanks Jan for reminding me I have one). Then I punched loads of stamps from a docrafts punch that is really for borders but it had different sizes stars so was ideal. I was going to chop of the stars in line with the card so it looked like they were going off the page but decided I quite liked them.

Now we have a problem, you may remember the mouse well he's back, last week I had to clean up the mess again, I had relaxed a bit a put in a coffee bag, well he opened that made huge mess and he attempted to eat the jar of peanut butter, by attempt I mean he eaten the cap right down to the glass. Well he hasn't be back, trust me you would know. So there's me sitting on the PC and I'm sure I can hear rustling so called DH who looked under the glass cabinet to find DS sandwiches when he was working and was too lazy to throw in the BIN partially beening eaten by a mouse. We opened the patio doors and tried to encouraged it out but it felt the cold and refused to go. So it was last seen almost running over my feet and under the kitchen cabinets, I stopped DH from pulling out the kitchen. Now DD thinks its sad because she is sure the poor thing has only three feet and wouldn't survive in the wild and it is Christmas. Bah Humbug.
Posted by debby4000 at 10:00 AM

The stars look fab going over the edge like that! Great card!

Cool use of the stars!

great card! love the stars going over the edge! TFS!

I absolutely love your take on the sketch!! Great inspiration!

Your place is valueble for me. Thanks!….