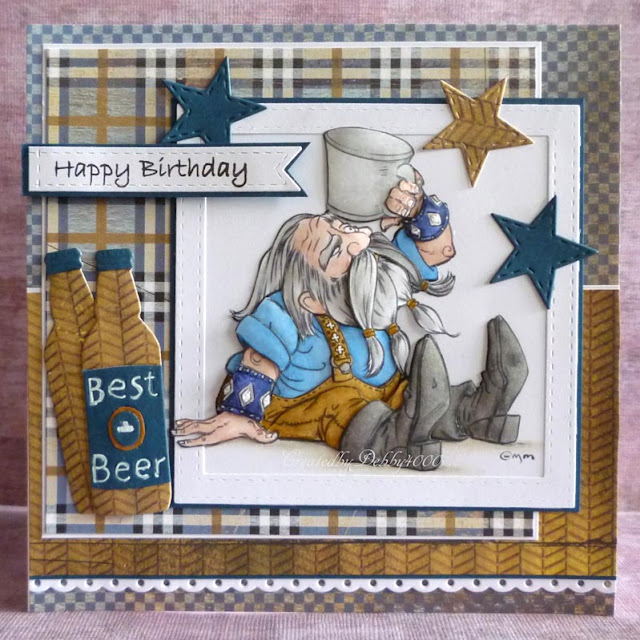 So I needed a card for my BIL who is known as Grumpy and he does love a drop of beer, so this image called Dwarf 6 from Mo Manning was perfect.

He was a bit of a devil to layer, so parts had to have part tucked under another layer but part still had to be on top but in the end he was worth it. Once the layered were dry I used a silver pen for the diamonds on his wrist bands. When that was dry with a cocktail stick and glossy accents I added a drop into each diamond to give them a realistic look.

The papers are some very old ones, some people who have been scrapbooking many years will recognise Basic Grey I think they were called Vagabond. I brought the beer die from Ally Pally and used a white pen and a gold pen to make my label.

That guy is cool Debby!! You did a stunning card xx

What a fun card for your BIL Debby and the image is great and love the colouring and decoupaging you have done and perfect added embellishments too. I particularly love the beer bottles. x

Stunning male card Debby.I love your design and colours and the image is fantastic ;D

Great male card Debby! I'm sure your BIL will love it!
Liselot

A brilliant card Debby, love the image- he looks fab and the beer bottles are the perfect finishing touch.
Lorraine x

What a lovely card, and lovely colours
From DK

Great card! Was this colored witb pencils? Thank you

Fabulous male card love the image and the layout x

Hahaha what a brilliant personalised card, bet 'Grumpy' loved this!