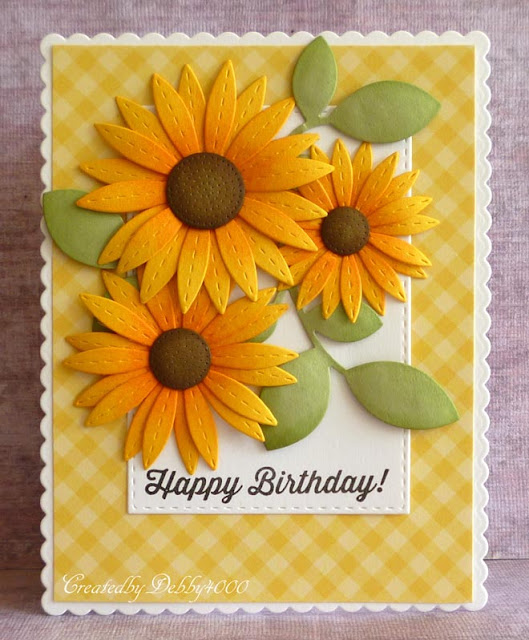 At the beginning of September it was Heidi of Simon Says Stamps Birthday so I made a Simon says Stamp Birthday card for her.

The wonderful flowers which I usually used for daisies are now sunflowers, I used yellow card but used an orange inkpad to make some shading in the centres. I also did that for the centres but obviously not with orange.

The Cluster of Leaves which I use a lot especially on 12 by 12 scrapbooking did get cut up a bit to fit my card.
I used Stitched Rectangles for the white centre mat and I stamped Happy Birthday from their stamp sets but I made this card a while ago I know it was a Simon Says Stamp set but for the life of me can't work out which one.

The patterned paper is MFT and the Scallop mat is Avery Elle.

Last weekend we went away to Norwich we had never been to Norfolk at all but I think we returned and I arranged to met my crafty friend Marianne and Hubby. We went for a meal but to be honest we could have eaten anything we were that busy talking. Graham took a pic which I have downloaded from FB. 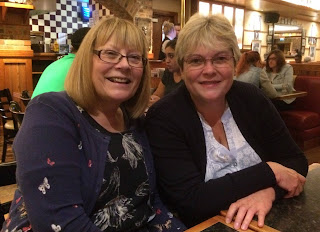 Trouble was I woke on Tuesday morning with a sore throat which lasted a couple days, just when I felt ready to go and make some cards one of my dodgy shoulders decided it would have a bit of meltdown so more forced resting. Its not quite right but its better than it was and just have to be careful not to over do it.

But I have piles of cards with inserts now but from now on when I photo a card I'm going to put an insert in and not wait till I nearly have hundred cards. Once I found where the safe place for my Christmas card I had a count up and I'm still halfway done, so be warned Christmas cards need to made as often as possible.

A card full of sunshine Debby it's gorgeous ..how lovely to meet up with Marianne

Sunflowers are a fave flower of mine and I love how you've created these from a different die!

Hope your shoulders recover soon. I had good intentions of doing inserts as I along . . . that resolution went by the wayside along time ago! LOL!

Your right about the Christmas cards, I NEED to be more productive.
Faith
x

Ah, marvelous, Debby! You always blow me away!

WOW Debby I love your card...the way you inked the sunflowers is so perfect and love the choice of background paper. So lucky to meet a crafty friend
Cheers
Dr Sonia

LOVE this, Debby! Perfect with the yellow gingham! And such a treat seeing a picture of you today!

Hi Debby this is a gorgeous card I love the sunflowers they are so pretty. I also love the photo of you looking so happy. Take care. Hugs Jackie

Your Sunflowers are just gorgeous Debby..beautiful card and love the photo of you girls..

Love this card. Will you send it to me on my birthday? lol j/k

Such a beautiful card Debby,loving those pretty flowers too ☺Viv xx

Such a beautiful card Debby,loving those pretty flowers too ☺Viv xx

Fabulous card Debby. Love the flowers. We met up with Marianne and Graham last Saturday at the craft fair they were doing. As we now live in Suffolk, we have met up a few times. It's lovely to meet up with blogging buddies. Hugs, Carol S.xx

This is beautiful Debby and the stitched daises have made great sunflowers, and I love the stitched sentiment mat and the gorgeous yellow gingham which is so pretty here. x