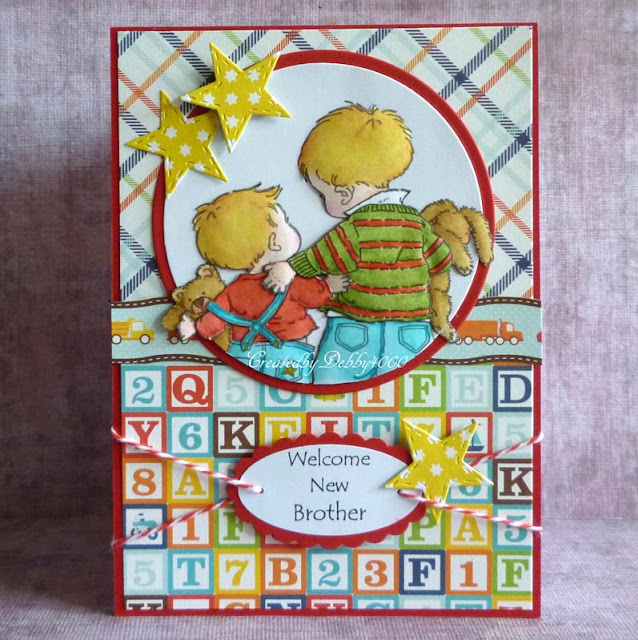 This image called Brothers from Mo Manning and when I saw the sketch on Sketch Saturday I decided to make it work with the image.

The only problem with cutting across the image is that I have to layer the image first let it dry and then trim round the mat. Normally layering at the end of making a card so it often feels the card has taken longer.

I used Echo Park Little Man and I had to make the sentiment and used Stampin Up punches to punch it out. Final finishing touch are Stitched Stars from Simon Says Stamp Bundle of Stitched Shapes.

Have you seen the fabulous new images from Mo Manning what with LOTV making Digi Stamps there will be no money in my Craft Money Box.
Posted by debby4000 at 7:00 AM

Absolutely adorable Debby and the colours are so bright and happy..a fabulous card.

Great - so loveley! Wonderful coloring the motiv and the many wonderful details - I like it so much.
big hug
Andrea-Emmi41

That is just super awesome :-D I love how you made the image stand out and your card design really rocks !! :-D

What a delightful and sweet image by MM which you have coloured and layered so effectively, and I adore the EP papers you have used together with the stitched stars as a pretty finishing touch. A gorgeous card Debby! x

Gorgeous Debby love the image popping outside the circle, Shaz in Oz.x

I came over to comment on your Simon Says Stamp Stamp It card, but this one stopped me in my tracks!!! What an adorable scene and matching sentiment. Your colouring is fantastic and gives the images a raised affect (3D).

Hi Debby this is a gorgeous card I love the image you have used. Take care. Hugs Jackie

Oh I need to get that image for my grandkids, this is just gorgeous Debby.

This is one of the best boy cards I've seen...LOVE the dimension you've created with this image! All your paper choices work perfectly together. This one is a winner!

This is an adorable, PERFECT boy card. You have outdone yourself, Debby! This one is wonderful!

A gorgeous card Debby. The stamp is adorable and i love the papers.
Lorraine x

What a cute card. Bright and colorful!

Awww that is such a sweet image! Beautiful card :)