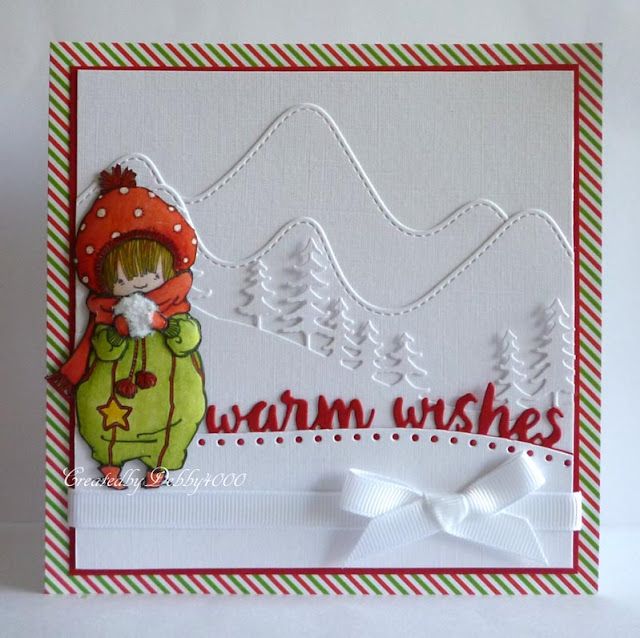 Apologies for the crooked and awful photo, I'm sure it didn't look that bad when I took it. But it is a square even though he doesn't look like it.

I used the cute Snow Tot One image from Mo Manning, isn't she/he cute, I've coloured using traditional Christmas Colours because initially I was going to use more of the Doodlebug papers instead the card turned out completely different.

First of all I decided to used the Memory Box Warm Wishes, I cut the words off in white added some double sided tape under the holes and added the red version to the back. I did have to save all the red dots so I could place them in the white, it was far too fiddly and probably won't be done again.

My Memory Box trees are newish (this is not a word but it should be) so I felt the need to use them and then I added the hills from My Favourite Things and before I knew I hardly had any space for my little Snow Tot. She was easy to cut out so I found a little space at the beginning of the words.

A wonderful card Debby..I love the snowy hills and trees and the little image is too cute..

A fabulous card Debby I love tbe WOW scene in the background and the sentiment stands out really well in the red, also the beautifully coloured snow tot from MM is so cute over the top. I love the pretty diagonal striped paper you have used too. x

Such an adorable scene! Reminds me that there's so much to winter that can be such fun, like throwing snowballs and playing in the snow.

Hi Debby this is a gorgeous card I love the image and the scene you have created. Take care. Hugs Jackie

A beautiful card! I nearly bought this little cutie myself... Perhaps I will now I've seen your card but I bet it won't look half as good as this, Jo x

GORGEOUS card, love the image, and your dies are just fabulous, you certainly have patience to add those red dots, but they do look really good. Worth the effort.
Faith
x

Looks fine to me, a totally stunning card.

Love this and it's so inspiring!!!

You have done a fab job here Debby. Love it!! xx

A gorgeous scenic card Debby, fab image and I love all the dies.
Lorraine x

Love the snowy hills and trees. Such a great holiday card.

WOW Debby ! Another gorgeous scene you built here ! I love everything, the background paper, the little girl with her fluffy snowball, the stitched mountains on this textured paper and this gorgeous sentiment die ! So Gorgeous ! Thanks for sharing.
Izzy Scrap