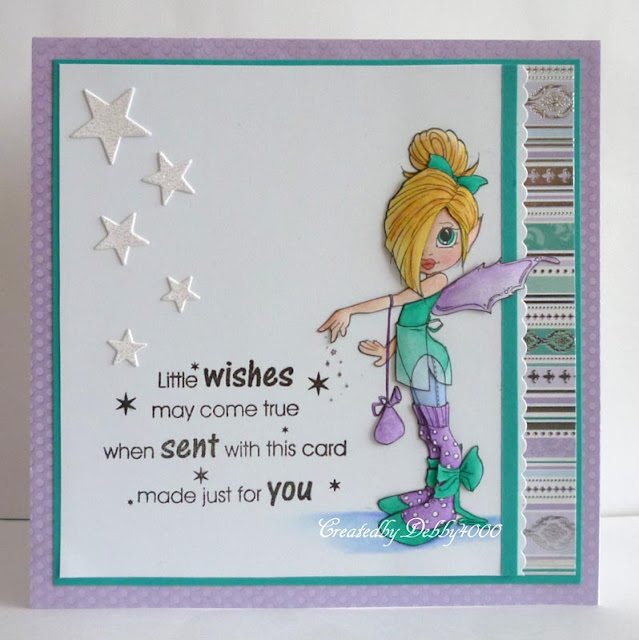 Few weeks ago I had a jolly good spend in  Saturated Canary and brought loads of digis because the shop closes down at the end of this month. So what do I do used a image that I'm pretty sure I've had for a while and used before.

Saying that when I reduce the image size to one that suits me I save them in a word file but there isn't one for this Tilly Fairy, there is now.

The papers are Kaiser and the stars are Simon Say Stamp die using glitter card. The sentiment that looks a bit crooked it isn't by the way just the camera playing tricks, I'm afraid I don't know its on a random stamp set that I've had a while.

I'm running late with one of my DT cards so that will be my first job today. I planned to make it yesterday then realised we had planned an Opticians appointment with a bit of shopping and I was taken out for lunch too. The good news I saved my husband over £300 by not needing new glasses but he just gave me that look.
Posted by debby4000 at 7:55 AM

She is gorgeous Debby and I love the colour combo and lovely sentiment..

Gorgeous card. Love the image and I adore the colour combo. x

Sad to hear another well known name is disappearing, seems to be the way of things the last year or so.

This is such a sweet image Debby and the colours and design are really pretty. The stars and the sentiment finish it beautifully too. x

I LOVE this image and the sentiment is perfect as always a SUPER card.
Faith
x

She looks fabulous and I love the sentiment.
Lorraine x

This is so beautiful! x

Love SC images and sad they are closing. A beautiful card and love the design. Hugs, Carol S.xx

Hi Debby, this is such a lovely card, lovely colours, great sentiment and a sweet image. Donna

This card is so fabulous Debby...... I love the purple and mint colour combo - and she suits the 3D look - especially her hair!

So pretty, so sweet. Love this one!