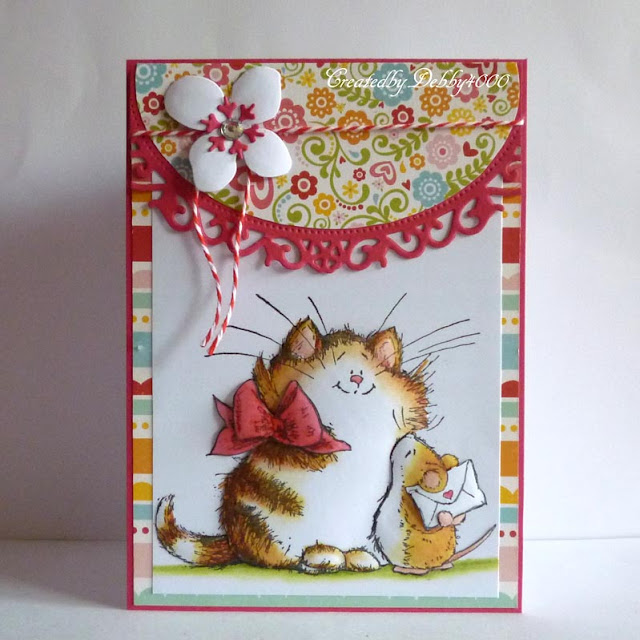 Now I know not to photo my cards first thing in the morning, there wasn't anything I could do about the shadow.

I used the floral oval to give me the shape across the top, It did think of using a circle die but I didn't have a fancy one big enough but the oval worked a treat.

I decided to used the Hydrangea dies from Simon Says Stamp and thats a Stitched Snowflake die for the centre. Now that I photo the card I'm not sure I should have used white but hey ho its done now.

Naughty me didn't make a card but had a bit of a sort out of my Scrapbooking paper, cut some into 6inches for cards and put some in a pizza box hopefully the retreat I go to in October will have swop box. There was a lot paper to sort out.
Posted by debby4000 at 7:31 AM

WoW Debby what a lovely card you made :-)) I like the colours you us and "letter" design.
Hugs, Andreja

Far too long I didn't comment on your blog Debby but hope to have a bit more time after a tough period. LOVE your adorable card and the top-solution is fab!!

Gorgepus, love the way you use dies differently. Love a sort out too, well done you x

Love this card image is so cute.

It's a really effective deisign with the top panel Debby.

Wishing you a lovely weekend.

I love the PB hedgies Debby and the colourful papers work beautifully and the pretty flower with the baker's twine finishes it perfectly. x

Love how you have put it all together, a beautiful card.
Faith
x

A great way to use that die Debby. Love the image and the pretty paper xx

This is really lovely Debby, love your use of the die and such a sweet image. Donna

It is too cute Debby!
Yours,
Martina

Oooo absolutely gorgeous, i'm loving the papers and a great use of the sketch too, Luv Sam x

What a darling card. So pretty. Love the colors and that sweet image.

Hi Debby this is a stunning card the cat and mouse are so cute. Take care. Hugs Jackie

Adorable card Debby and a lovely design..that little mouse is too cute..

An absolutely Gorgeous card Debby, I like the sweet image and the design
Kevin xx

Love how you've used a snowflake for the flower center...nice. Very pleasing colors. Thanks for posting!

Great card, love that pretty border :) I need to have a tidy up today too, my table is getting out of hand!

Love those kitties! One of my favorites! Lovely card! I have to mention, too, that it was fun to see Yates. I'm a Yates from way back. lol Hope you're having a great day!

Such a sweet image. Love this card, Debby, and the way you used the fancy oval die-cut at the top.