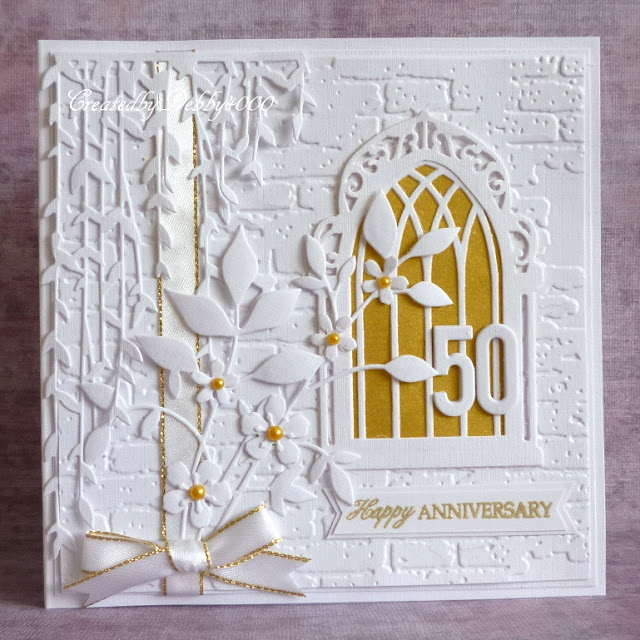 One of the cards I've made recently that I had to wait till the person receives it. It does look rather busy but in real life its not that bad.

First of all I embossed two Bricked by Tim Holtz you may be wondering why two, the reason is simply I made a square card and the folder is for a rectangle. My join is under the ribbon which I wish I just used my white grosgrain but it was stuck and wasn't going to be moved.

My Arch Window is from Spellbinders back with gold and the numbers I think are Simon Says Stamp numbers but I cut them twice and layered.

My flowers are Memory Box Fresh Foliage and the flowers are memory box too along with Weeping Willow finish with some gold pearls. The sentiment is LOTV that is gold embossed.

Glad to hear the couple who received it loved it. 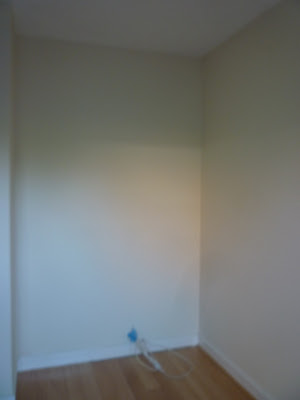 So this was the empty alcove in the dining room that had three shelves on bars at the back, which housed the PC and a lot of other stuff. 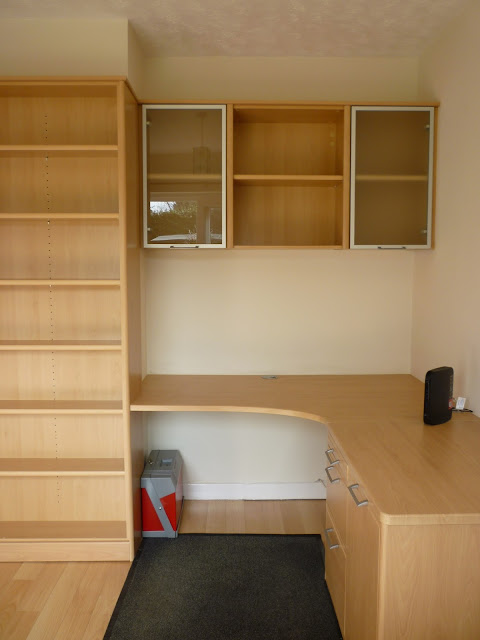 Here's the alcove now looks much nicer although the fitter was annoyed that the display shelf in between the glass cupboards wasn't bubbled wrapped like the bookshelf and was damaged. But it should arrive this week and his is making sure it does because he doesn't get paid till the job is finished.

The other stuff apparently isn't allowed back so muggins here has to find new homes for everything. I have one little cupboard that now has 6  7lt really useful boxes full of Penny Black stamps and I've even sorted out some to give away. Now I have to find somewhere for the next 12 drawers of crafty stuff.

Nobody does wow quite like you Debby, it's a delight. Good luck with the reorganising, it always seems like a never ending job to me.

What a beautiful card Debby and Brenda is quite right your WOW really is a Wow!! Love the look of your little crafty corner...I don't envy you having to sort through your stuff!! xx

Beautiful card, the touch of gold is just right. New corner looks god but what happened to your craft space? Liking the sound of giving away PB stamps, I stalk Ebay for them x

Gorgeous card - I think the ribbon is fine

Beautiful card and so exciting to get a lovely new craft space. I'm also an avid watcher on eBay 😊.

Hi Debby, a absolutely stunning Anniversary card !
Everything is perfect. I don't mind to take some
stamps off your hands. Do you sell them on here ?
Your new work space is lovely, wish I had one.
Maria x

Your card is STUNNING, I hope we get something like this on our 50th in June. I LOVE all the details including the ribbon it has just the right amount of gold.

What a fabulous corner you have, looks really comfortable to work in.

A gorgeous card Debby and love the wow with those touches of gold and all the fabulous MB flowers and foliage and the recipients must have been over the moon to receive this card. I love the wonderful use of the alcove too, it looks fantastic! x

Totally stunning Debby, I love it's elegant style and I'm sure it is loved.
Fabulous new look to your room, Kate x

Hi Debby this is a gorgeous card I love everything about it. I am sure it will be treasured for a long time. Take care. Hugs Jackie

A gorgeous card Debby, love the design and all those pretty dies.
Your alcove looks fab too
Lorraine x

That is one very beautiful card .. .. so many gorgeous dies.

Loving the look of your alcove. You will enjoy getting that all loaded up and organised.

Sounds like you have collected as many Penny Black stamps as me!!

So beautiful is your card Debby and love your cupboards x

Beautiful card Debby..love all the white, you do that so well..love your alcove space...lots of nice storage..

Love the stunning card and your alcove is looking fab x

Now that's a stunning 50th anniversary card! Love the look of the weeping willow die-cut against the brick. Also, I think your gold-edged ribbon looks perfect!

A superb golden wedding anniversary card. Really loved its design. Thanks a ton for all photographs. Our anniversary is coming and want to host a family outdoor party but having a hard time in finding suitable garden themed venue NYC. Hoping to book one soon.