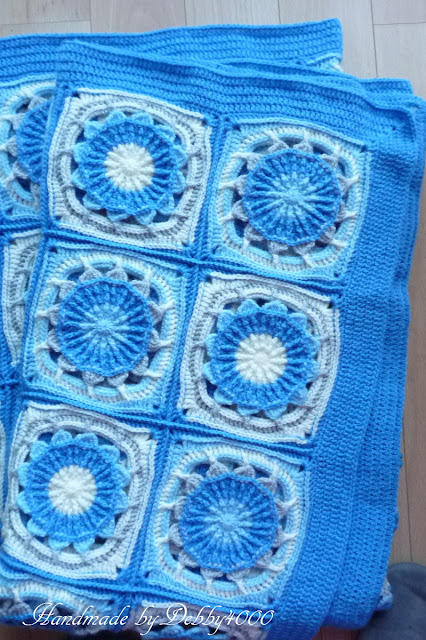 I do have some cards made but until they are received they are waiting in my drafts but I have finished this crochet blanket.

I found the pattern on Pinterest here if you follow the image on Pinterest it will take you Ravelry which if you knit and crochet there are plenty of free patterns. This square is called Prince Protea I haven't done last three rolls.

Since I had finished and I still had a trip up the motorway a few weeks ago I started up another but this time I've used some old pastel colours I have left from various project and added some white to make what I've called my Ice Cream Blanket.

By the time I finish that one we will be on another trip on the motorway this time I'm thinking of making a Snowflake one ready for Christmas.


Don't worry I do have a Penny Black card for tomorrow.

That is beautiful Debby. Love the pattern.

This is lovely Debby. Such a pretty combo of blues.
Toni xx

A beautiful blanket. I've done many crafts over the years, but have never managed to master crochet so I have great admiration for anyone who has the skill!
Kath x

Such beautiful work. seems I think as KAth and Pop's Cards, I wish I could master crotchet, I can do it, but it never looks as good as this blanket.

This is fantastic work Debby and I have crocheted a blanket in the wavy stitch but haven't attempted anything quite so complex looking as this. I love all the blue tones - so pretty. x

What a fabulous blanket Debby. xx

This is gorgeous Debby, a fabulous pattern and lovely colour.
Pauline
x

Beautiful! And what a great way to spend a car journey :)

Wonderful Debby, you have done a great job.
Love the colours used together xx