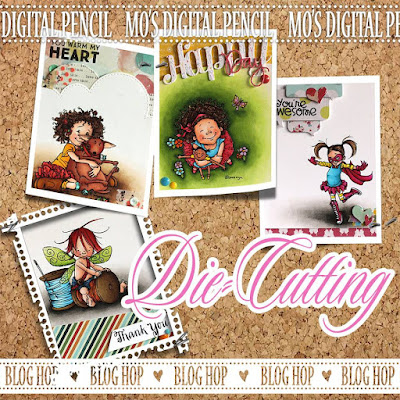 Its time for another Blog Hop and this time Alice has chosen possible my favourite theme of
Die-Cutting. 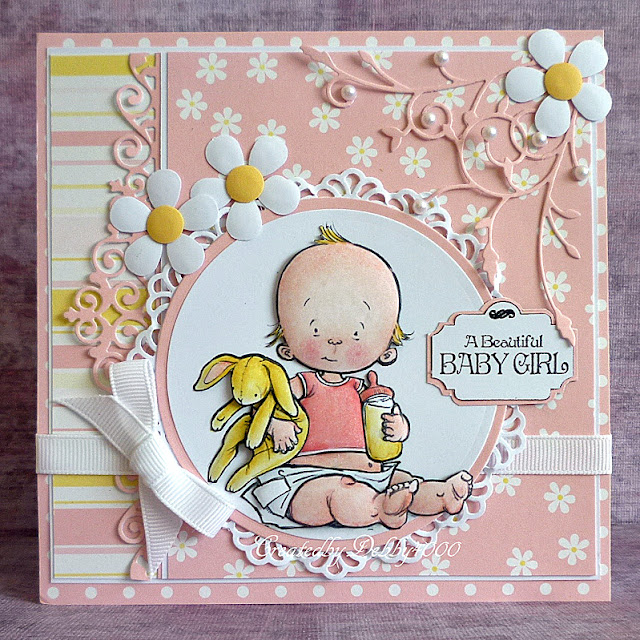 I decide to use Spit Happens to see how it looks in pink, I know most babies have little hair but she still reminds me of  a boy!

So how many dies could I used on one card in the end I did cheat a little with my flowers being made with punches. First of I used my circle nestablilities and then used MFT Crochet Border which made the border round the circles, I love how this border butts up against the next one so you only have to hide one join.

The fancy die down the side is either Marianne or Joy not sure which but its blue die. The other die is from Memory Box and it the corner flourish that as a few dots on which cried out for pearls. Already mentioned the flowers and the sentiment is from LOTV but its not a die but two stamped and cut out then layered.

Sorry no idea who the papers are from they are odds and ends I have put together and only had enough for this card.

So back to the Blog Hop so you should of Hop Skipped and Jumped from Gaynor and now you need to do the same over to Lou and don't forget to comment along the way there's two random prizes taken from someones comments.

Such a sweet baby card gorgeous image and lovely embellishments

oh my cuteness!! this is just perfect Debby,so pretty and gorgeous layering too xxxx

Awww, adorable card! Great use of the die cuts. I have photos of me looking like this as a baby with not much hair either :D. Debra x

so sweet love it

Sweet sweet baby... and his skin is perfect ;)

A really cute MM baby image Debby and such a pretty card with all the dies and lovely patterned papers. x

Oh my... this beautiful baby is soooo cute and lovely!!!! Love the colour combo and all the dies you've used! Brilliant!
Hugs and Smiles
Francesca

What a beautiful card!

This is just darling. Love the sweet image and all the die cuts you used. Very pretty card.

Oh Debby this is stunning I love everything about it and the image is just so cute. Take care. Hugs Jackie

Oh Debby, she is so cute ! A very lovely card
love the papers used.
Maria x

This is adorable! love the cute image and pretty design
Lorraine x

Such a sweet card Debby, an adorable image.
Pauline
x

She is a sweet image and a gorgeous card. Love the hair tuft! Hugs, Carol S.xx

Love how you embossed the back of Mo's baby. The die cuts make it a really beautiful card. Thank you for making it. Kathy

Love this image and such a beautiful card Hun xx

I'm with you on the boyish look, but I still love your card.
Hugs
Conny Hillgaard
connyssyslerier.blogspot.dk

This is a baby you could squish because it's so cute. I had no hair until I was 2. My mudder had to tape a bow on my head.

A gorgeous baby card!
Love your colouring and the die cuts you've used.

Awe Debbie, I love your sweet card! I think she looks girlie--with not too much hair LOL!