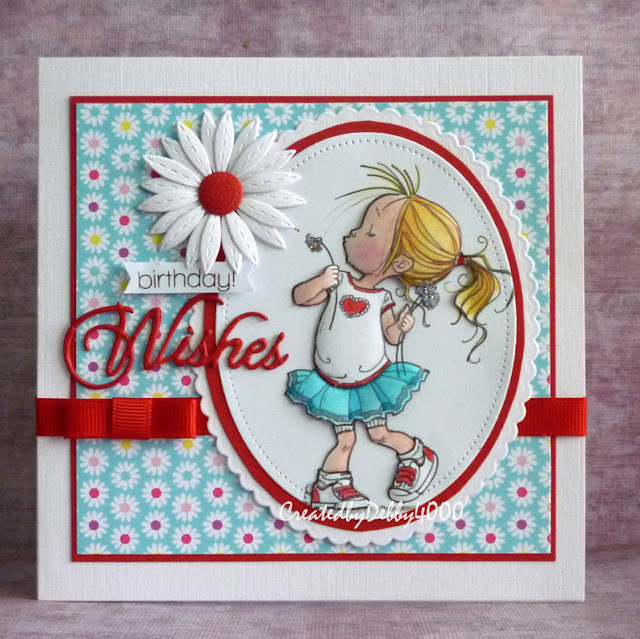 It may be a Mo image but you can also get this fab image as a Penny Black Cling stamp called Make a Wish.

The papers are Taylored Expression For Peeks sake, I had planned to use a couple of them but in the end I just used this pretty one and a lot of white.

I used the Avery Elle Sweet Scallops die but there isn't a die for between the dotty oval and the scallop so I use a marker with the thicker end and drew round the oval then cut its a bit rough which you could used an emery board to smooth down.

I've been wanting a Wishes die but all I could find was Wish but I saw this set of dies from Penny Black Wishes die and realised I had that set already and I could leave out the Best which is what I did. I then add the Birthday from the Simon Says Stamps Happy Sentiment stamps.

Just needed something to embellish and I decided to use Simon Says stamp Stitched Daisies. Just had to put a bit of sparkle of the dandelions and I used stickles. It was nice not to do something Christmas related.

I've decided on my favourite Christmas cards and the post is waiting to be written up which I will hopefully do this weekend and schedule for Christmas Eve.

Oh Debby, this is soo cute and already spring-like =) I love this image, too...I have it as well!! The stuichedt daisies are fantastic! They will go to my wish-list! =)
Hugs,
Martina

Such a gorgeous card Debby love those stitched daisies

So beautiful as always is your card Debby ....sending lots of Christmas Wishes take care xx

Beautiful card Debby, I like the image and the colours
Kevin xx

Gorgeous card Debby. Glad you are doing the favourite cards again....Sorry I must have missed the post...xx

So pretty. Love the colors and that adorable image. The background paper is perfect with that pretty white daisy.

This quite delightful! It is a well thought out beautifully executed design. Your colors are well integrated throughout and your image is beautifully colored. We have chosen you as our FB Designer of The Day for Sunday, December 20th. Please stop by www.facebook.com/avenue613 to say hello and to grab your DOTD badge. If you don't do FB, let me know and we will figure out a way to get your badge to you!
Hugz,
Chana Malkah Harris, Owner
613 Avenue Create Challenge Blog

Aw, she's adorable and I love the pretty papers and layout
Lorraine x

This is a really lovely card Debby and the PB MM design stamp is just so cute and sits prettily on the scalloped and stitchched oval mats, and I love the bp echoing the flowery theme to go with your stitched daisies and then the sentiments and ribbon finish it perfectly. x

So very cute Debby, love the colour combination and great idea with the die word.

Love this card Debby. I love the word dies. A soon to be investment I think in my house. Great card z

A beautiful design and a nice change from the Christmas ones. Love it.