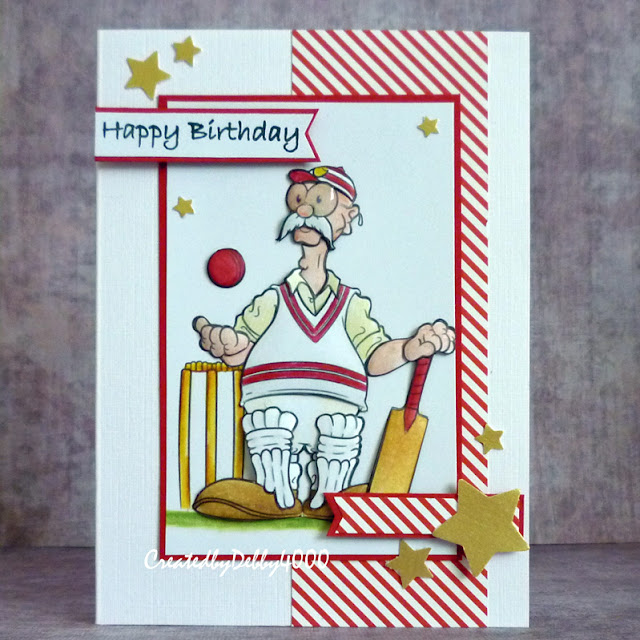 Yes I'm still on a CAS kick especially has I kept Mr Digi Cricket image mainly white and it just so happens that the strip of red and white was left over from another card.
I think the card was based on an old Sketch Saturday Sketch although I can't work out which one.
That sentiment is the one sat on my desk, I rarely take it off the acrylic block and I just had a tiny bit of stripy paper to make a fish tail banner.
The gold card was on nearby since a gold failure ended in the bin but I had scraps of the gold left and used it with some punches to make my stars.
I've not made many cards this week, its working out I've made one a day but I made a wedding card can't show yet and a Birthday card can't show that yet either, also made a DT card for next week another card I can't show. So maybe today I'll make a card I can show.

Great card for the guys Rachel and his glasses are a lovely finishing touch.

I love this, such a fabulous image ( would be perfect for my Dad!) and your design is fantastic.
hugs Sue xx

What an image Debby, its a class card.

He always makes me smile Debby!! a fabulous card xx

I love it, the red stripes really show him off. A great character isn't he?

LOL oh Debby what a brilliant fun image that is I love his glasses also the design it looks great.
hugs
Lorraine x

Great card and super use of all your scraps Debby!!

I wish I had your brain and talent, another totally and utterly fabulous card.

Another stellar Dr. Digi card, love everything about your card!

This is a really fun image Debby and I love the red stripes in the background and the little of accents of red on the jumper and the bat and ball. x

Fabulous use of snippet paper, wonderful colouring and dimension. Love the glazing on his glasses too! A super card! Hugs, Lesley

What an AWESOME Card Perfect!