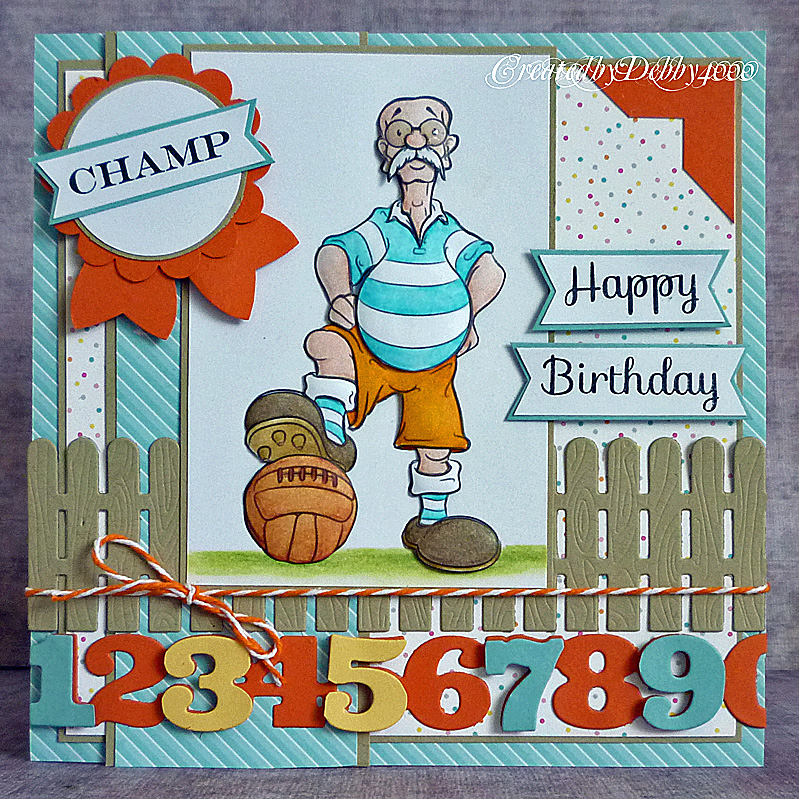 I had made my BIL his card using random numbers but he sponsors football team at the one of the Leisure Centre his company cleans. They are mainly made up with lifeguards that work there. The first year they actually made it to the final, I remember it well, we all turned up and it was flipping freezing I said if I had to go again I was bringing my duvet. Luckily that didn't happen till this year and I was coming back from the Craft Retreat so wasn't up to going which is typical because they won!

Without being rude my BIL is the old guy holding the cup! I decided to change his card to the one above. I've used Dr Digi Mr Dumberton since I think next year he should join them.
Not sure on the papers I think they could be Echo Park but the number border is a new die but I cut it out a couple of times in different coloured papers and cut out a few of the numbers.
Fence is MFT and I made the rosette with various punches but the word champ was computer generated although the sentiment is a Simon Says Stamp. And it simply wouldn't be right not to add glossy accents to his glasses.
Hopefully BIL had a good Birthday no doubt I will hear all about it when he comes home from his holiday.

What a fab card for a footie fan Debby, I bet he loved his card so thoughtfully personalised.

I so love this card! The image is fabulous and I love the colours!!

This is a great image for your BIL Debby and love that three colour combination you have used and the picket fence looks great behind the image, and the rosette with 'champ' is just perfect. x

What a great card Debby, just right for a football fan and beautifully designed too.
Lorraine

Lol Debby I am sure your BIl appreciated your card. It has so much character and I love how you did the numbers at the bottom.
Hugs
Desíre
{Doing Life – my personal blog}

Hi Debby,
Oh this guy have so much character , I'm sure you BIL loved it
because I do :-)
Where did you go for the craft retreat ? hope you had fun
Take care Maria x

What a brilliant card DEbby...love the numbers xx

This is brilliant Debby. Love the image and fab layout.
Lorraine x

Fabulous card! Love that image! The old guy is just too funny...but lovable, too!

A fab card and image, this is sure to be a hit!

I swear Derek is by far the cutest football player there is! Terrific card and congratulations to the team!