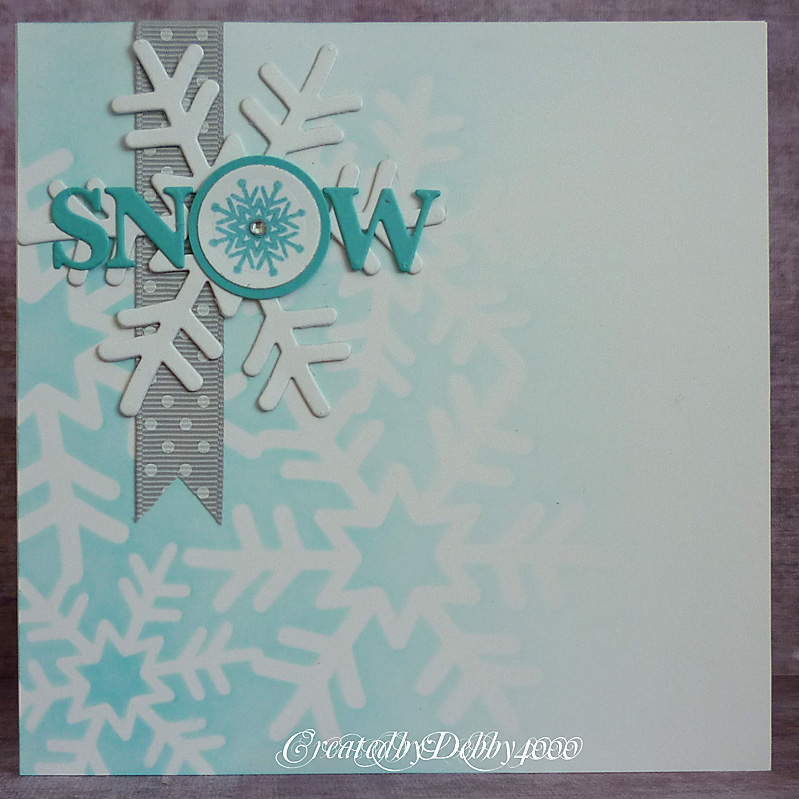 One of the cards that were failing me on Saturday but yesterday put the finishing touches using the sketch from CAS(E) this Sketch. I also knew if I didn't post today it would get lost in my drafts posts.
First I used the Snowflake Stencil from Simon Says Stamps and decided to use the large Funky Snowflake die which matches the stencil snowflake. I cut it out twice and layered it so it had more dimension.
The little blue Snowflake comes from Simon Says Stamps new release of Ornaments and Presents and with the Memory Box Alphabet die made the word Snow.
Considering once I use the stencil I had a brain block on the Saturday this card turned out really well after all.

This background is awesome.... Would you share the how to with me???? Just lead me in the right direction... Thanks a bunch!!!!!

So very beautiful! Gorgeous colour and I adore the background! x

Absolutely gorgeous Debby! I love how the snowflakes all echo one another and the colour is beautiful.

This is a Wow card Debby, love it! I think I have that stencil, will have to put it to use!

Debby this is so lovely x

This is gorgeous, such a beautiful and delicate design.
hugs Sue xx

This is gorgeous Debby. I love how the snowflake fades out and the die cut snowflake and ribbon are beautiful.
Have a lovely week.
Hugs Sharon x

Love the simplicity of your card, very pretty!

Beautiful!
Have a nice day,
Colinda

A beautiful CAS design, the background looks so lovely!
Rebecca.

Oh, this is so pretty! I love the layers! Great take on the sketch!

such a pretty background and colors! beautiful card! Thanks so much for joining us at CAS(E) This Sketch this week!

Gorgeous take on the sketch! WOW!