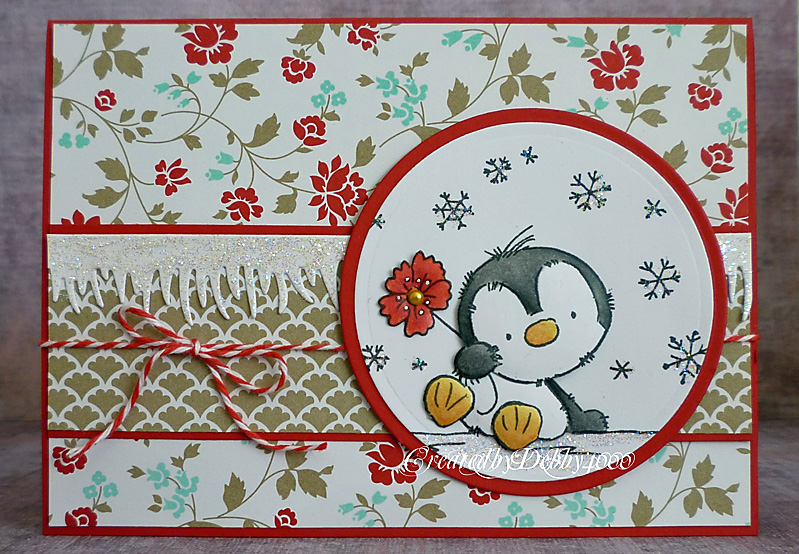 I thought I would post this card today so it would be in time for the Freshly Made Sketch for this week. Considering there's no embellishments this is pretty busy.. Not my best idea but the papers need using and I love the pretty flowers but maybe not with my penguin cos he looks a bit lost. I just added a MFT grass die upside down and added some sparkle.
My cute penguin is from LOTV and he really need his nose layering never mind I'll try to remember to do it next time.
I've just discovered that Squirrel when of the blogs I have followed for ages is having a one off PENGUIN challenge, so I have added my card, do check out her post.
I had planned a day of card making yesterday but first I had to make my DT card. After throwing away nearly a whole tree and was about to resign my place on the team. I finally made something that was as close to an OK card I could get and then discovered the item I used is out of stock. But it will still have to do so I left it to dry and tried to make something else but things just went from worse to even worse. So I decided to put the craft scissors down before I threw all my craft toys out of the pram. So lets hope today will see an improvement.

Aww just gorgeous and so cute!

Hope you are having a better day today Debby. Lovely card the penguin is so cute x Susan x

Adorable and super cute!!
Enjoy the rest of the weekend.
Debs xx

Hi Debby, this is a gorgeous card. I really hope you have a better day today...I know, I for one have days like that too!!! Take care..xx

What a little cute that penguin is.
Hope you have a good Sunday.
Toni xx

Totally adorable. Hope you have a better day today x

Hi Debby what a cutie! Hope you have a more productive day today.Have a wonderful day, Susan x

Your Saturday sounds much like mine Debby, blame the weather.

I do like this sweet card and the pretty DP's.

Hope your Sunday is an improvement on yesterday.

a beautiful and cute Penguin Entry, I think we all had a ooooooooo must enter that moment lol
hugs Kate xx

Aaah what an absolute sweetie and i hope today's crafting is better, Luv Sam x

Is it busy??? Seems to work beautifully to me hun, Jo x

I can only imagine that with your talent, your "worst" probably ranks next to (or even above) my very best! This card is very fun. Love that sweet little penguin.

Loving the papers on this one Debby and the image is so sweet too, got a soft spot for penguins.
hugs Jacee
Simply Paper Card Design

Ah this is just so cute!
Jane xx

He is as cute as a button Debby and I love the papers..very pretty.

A sweet card Debby, such an adorable penguin.
Pauline
x

I love these papers, I bought two of the pads, Fabulous penguin, brilliant card.

This is so cute. Sweet image and gorgeous card Debby. Hugs, Carol S.xx

That is such a sweet image! And I love how you've colored it! Thanks for joining us at Freshly Made Sketches this week!

Such a sweet little penguin hun, and I think he suits that pretty paper really well. Thanks so much for joining the fun at TGPC, great to see you. Hugs xx

Now I just can't picture you throwing your toys out of the pram...not at all!

This is a lovely card. You are too hard on yourself as i always love every single one of your cards.
He is a sweet and adorable little fellow.

LOVE your pingu chard Debbie. This little LOTV image is my fave!! Thanks for joining in the Great Penguin Challenge, he's adorable.
Hugs
Annette
xx

Gorgeous! Such an adorable penguin and I love the icy border!
Rebecca.